Driving to church Sunday morning at 8:15 a.m., I spotted a man walking on the other side of the divided highway. Having never seen a pedestrian on our highway in nearly eight years of living in the area, I found him incongruous. He wore casual business clothes, something out of a Dockers ad, and had a nice outdoor jacket with the collar turned up. He looked about 40, with that quintessential “used to be an athlete, but now gone to mush” body type. Heading into the rising sun, he kept his eyes straight ahead, content to seer his retinas.

Of course, I looked for the broken-down car, but there wasn’t one. Nor was he in an area that had many houses or destinations nearby.

He was just out of place.

And I had places to go.

I soon reached the horizon point for assistance and crossed over into that land of questions and regret. When I prayed for insight into the man’s disposition, the image I got in my head was of him walking for miles until he came to a lake, whereupon he continued his stroll and let the waters come up over his head until there was nothing left of him to see.

Barring the truth that I had been up too late the night before, plus being useless for anything before 10 a.m., I didn’t give the image much thought. But then the message at church touched on the desperation many Americans feel right now, and the image of the man walking into the lake jarred me.

Driving home, the parable of the Good Samaritan popped into my head. What got me was the idea that the man left beaten by robbers bore contusions that marked him as a victim of violence. His wounds cried out. A quick visual would tell anyone that this was someone in dire need of medical attention.

But what of the people who have been mugged by life, whose bruises are internal, on the soul, the psyche, who have been beaten up by simply existing? 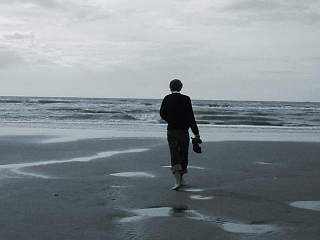 They look normal on the outside, but on the inside they are hemorrhaging emotionally. Because we can’t see the wounds, we think everything is peachy with them—until one day they get up, put on a nice pair of slacks with coordinating shirt, tell the wife they’re going to clear their head by taking a morning constitutional, turn up their jacket collar against the world, gently close the door behind them, and proceed to walk into dark, chill waters.

I don’t think we have ever had the opportunity in our lifetimes (speaking of those under 50) to reach out to desperate people in search of greater meaning than we do now. If I were a leader in a large Protestant denomination or parachurch ministry, I’d have someone shooting a commercial to air on TV at every opportunity that says, Each of us has a story.  We will listen to yours and help you write a better ending. Because Jesus cares, we care, too. Your story matters to us.

I think millions of people out there are dying for someone, anyone, to care. Listening has never been a great strength of modern Christians, but I’m convinced that we have got to get better at doing it. Not offering advice, not quoting Romans 8:28 at people, but just listening. The need for this kind of ministry has never been greater.

But it takes time. It means laying down your life, not in a “bloody martydom” sort of way, but laying down schedules and busyness. Because taking the time to listen takes…well, time. It takes commitment to listen to someone who is hurting. Sure, we may take time for people laid up in the hospital after being in a physical car wreck, but what time are we willing to give to people who have been in a mental one?

Some of us long for opportunities to be Good Samaritans, yet we ignore this vital, vital means to bind up the wounds of the brokenhearted. It’s not as flashy. Nor is it over quickly. But God knows it’s never been more needed.