Around Holy Week, we reflect on the passion of Christ and read the historical record of His death and resurrection. And every year I am struck by this verse:

And the curtain of the temple was torn in two, from top to bottom.
—Mark 15:38

While many note that the rending of the curtain signifies that we could now approach God wholly on our own through Jesus, I also see in that singular act a devastating indictment and warning. For with the curtain’s tearing came the departing of God’s shekinah glory from the temple.

What staggers me in that departing is that for nearly forty years afterward, until the destruction of the temple in A.D. 70, 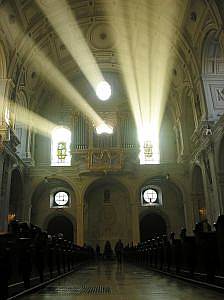 the Jews continued to perform their religious duties in the temple as if nothing had changed!

Didn’t anyone notice that the glory of God no longer dwelt there? No one? Didn’t the high priest say to himself, “You know, something’s different”?

If a history book exists that details the angst the Jewish priesthood felt in the aftermath of the curtain’s tearing, I haven’t read it.

No, the shekinah glory of God departed and no one seemed to notice.

We need to ask ourselves this: If the Jews of that day, who were a stringently devout people in practice, didn’t sense that the glory of God had departed, what does that imply of people who are barely spiritually aware?

Though God no longer dwells in temples made by human hands, abiding instead within each believer, a symbol of the shekinah light exists in the New Testament:

Remember therefore from where you have fallen; repent, and do the works you did at first. If not, I will come to you and remove your lampstand from its place, unless you repent.
—Revelation 2:5

Might the Lord remove His lampstand from among the unrepentant today? (Would anyone care to test Him? I certainly don’t.)

But the greater question here is, If God so removed His lampstand, would we even notice? I mean, are we that much more spiritually aware than those post-torn-curtain religious leaders of the Jewish nation circa A.D. 33?

As for me, I wouldn’t gloat by saying yes. As it is, our churches and our people today don’t seem much like the vibrant, miracle-filled, God-aware believers found in the Book of Acts.

Which leads me to wonder where that puts the American Church circa A.D. 2009. Declining attendance figures, worldliness, no love for the lost, unrepentant and divided hearts—has the lampstand already been removed? And if so, would we even know it?

Or might we simply continue performing our little religious rituals week after week, never realizing that the shekinah glory of God has moved on to a better place.