It is rare that I read anything on the Web that sets me a-nodding from the first line. Josh Harris’s reprint of “Exposing Major Blind Spots of Homeschoolers” by Reb Bradley gave me motion sickness from my perpetual head-bobbing in agreement.

Beyond its look at how homeschooling parents can miss the forest for the trees, it exposes the general disconnection from simple reality that often plagues the most zealous Christian families and churches. Bradley’s confession at how his son received more love from the boy’s tat-laden, stoner co-workers than from his own Christian family is a tale oft-told yet one rarely comprehended.

It’s also an article woven through with examples of overt gracelessness, as holier-than-thou condemnation takes center stage in households that should know the core of the Gospel better. But knowing isn’t always living, and if anything, better praxis in the American Church is the one area of needed growth no rational person can argue against.

I’ll also put in props for my previous post (“Fear: The Ruination of the American Church“), as the Bradley article amplifies how fear of the times and the world as it is contributes to the errors committed by well-meaning Christian homeschoolers.

More than anything, I believe this article argues for the Way of the Average. I continue to note that the people who seem to get on best with life are those who were neither too outstanding nor too underperforming. I learned this at a reunion many years ago: The people who were average in high school (and possibly overlooked then) were enjoying the best, happiest lives.

One could argue from the experience of averageness that it is not the spiritual superstar in the youth group who goes on to achieve the greatest ministry. Same goes for the über-student held out as the homeschooling pinnacle. For every Nobel prize winner, there’s a Todd Marinovich. It very well may be that it is possible to be too Christian, especially when that which is gaged as “Christian” has more to do with impressing the spiritual Joneses than with clinging to the Faith as expressed in Palestine AD 60.

Hat tips to Challies for bringing this one to light and to all the others who noted it. Do read this one. It’s an 11 out of 10.

Things I think about…

Seven years ago, few of the moms my wife and I knew worked. Today, nearly all do.

Many of the men we know make less money than they once did. And that was before enormous increases in the cost of nearly everything, so their reduced incomes buy even less.

More than 2.5 million jobs evaporated in 2008. Gone. Possibly for a long time.

Every indicator shows that more households than ever homeschool. At least that’s what the latest polls show. The problem is that most statistics run only through 2007.

So what’s been going on in the last year or so in the homeschooling ranks as the economy slipped into depression?

Truth is, I’m not really sure. Few homeschooling resources are talking about the economy. (Although I did find one, and almost could not believe what I read there. Yow. Talk about spin!)

But I have got to believe the downturn must be having some effect. With many male breadwinners succumbing to the pink slip parade, more jobs will open for moms, if the last downturn proved anything. Dads? Not so much.

Where will that leave homeschooling families when mom is forced to do full-time work to keep the family in their home? What happens when both parents are scrambling for elusive jobs? What happens to a mom forced to return to work having been out of the workforce for…well, a small eternity.

For many families, homeschooling is a badge of honor, a sign of God’s righteous blessing, and the password into that hoity-toity back room at the world’s most exclusive club.

And I say that as someone who has homeschooled and fully supports homeschooling families.

Sometimes good Christian people will talk and talk about a subject as long as that subject is working in their own lives. The second it stops, the silence is deafening. 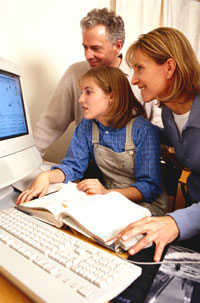 I’ve seen this so many times I may trademark a term for it.

For some families, the shame that comes from extended unemployment may lead, in their minds at least, to an even more crushing blow: the inability to continue homeschooling. (That shouldn’t be the priority, but it is for some.)

Though this post may be nothing more conjecture on my part, I know that my wife and I had to make tough decisions about homeschooling and the future of my business (along with my role as primary breadwinner). Homeschooling lost. Was that our wish? No. But sometimes you really can’t have it all.

If you’re a homeschooling family that is dealing with the kinds of situations I’ve outlined in his post, I want to extend to you something you may not find elsewhere: grace. I also want to hear your story.

Thanks for stopping by. God cares. So do I.

(I’ve writen extensively on homeschooling. Some of the best posts: The Myths of Homeschooling Series:1, 2, 3, 4; A Few Thoughts on Homeschooling, A Bag Full of Wet Tribbles, Choosing Your Canaan, and Super Christian Homeschooling Ninja Moms of Death.”)

A couple weeks back SF Gate columnist Mark Morford wrote an op/ed piece called “American Kids, Dumber than Dirt” in which he quotes a longtime teacher friend as saying that kids today are stupid to the point of verging on inert:

It’s gotten so bad that, as my friend nears retirement, he says he is very seriously considering moving out of the country so as to escape what he sees will be the surefire collapse of functioning American society in the next handful of years due to the absolutely irrefutable destruction, the shocking — and nearly hopeless — dumb-ification of the American brain. It is just that bad.

I know that I’m perpetually saddened (yet oddly amused) by what people don’t know. And that’s not in some kind of snobbish way. Watching a high school graduate grossly mis-tally a simple three item receipt from a restaurant makes me wonder how such a lapse can exist.

But as much handwringing goes on today about education, I keep returning to one inescapable truth:

Kids are only as smart as their parents are.

The apple doesn’t fall very far from the tree, and in most cases today, a lot closer to the trunk than some would like. But when it comes right down to it, smart parents have smart kids—no matter what kind of education (public, private, or homeschooled) their children receive—because the parents themselves value education and pursue it in their own lives.

If the parents of a child are about as sharp as a bag of wet tribbles, then how can we expect the child to exceed the parent? That rarely, if ever, happens.

We expect most homeschoolers to be winners of spelling and geography bees, but look at the parents in those cases. They’re engineers, scientists, academics—the national brain trust, in other words. The only way they’re going to turn out a dim bulb is if they give birth to a brain-damaged kid. And even then, that’s going to be the brightest brain-damaged child of the lot.

But even when it comes to homsechooling, the weak link in the chain is the parent. A parent with smarts that rate a 6 on a scale of 10 is probably not going to teach their kids to a level 8 or higher. Why? Because that parent will be uncomfortable exceeding his or her own knowledge. This leads to what is known as the law of diminishing returns.

Parents are never going to feel adequate to teach their kids to the limits of their parental smarts—ever. That truth wipes out most distinctions of public, private, and homeschool. As much as a we’ve castigated public schooling, smart parents who put their kids in public school are not going to turn around when that kid is eighteen and find a numbskull. This truth works in the opposite, as well. If parents can barely tally three lines on a restaurant bill, why should we expect their children to? Yet we’re perpetually astonished by the seeming ignorance of youth today.

“But Dan,” you say, “isn’t your blog about the Church in America? How does this fit with your theme?”

If we wonder why the youth of today can’t theologize their way out of a damp paper bag, we have to look at the parents.

Christian parents suffer from a few maladies that make them inadequate to the task of teaching their children about the Lord:

So how do we get parents into the right mindset and smarts-set to do this important job?

So yeah, it IS all about the parents. If we want smart kids, we better make smart parents. And there’s no better time to start on that path than today.