Today is Thanksgiving Day in America. We have so much to be thankful for. I just wish more of us were fixated on the providence of the Lord and less on schemes for hitting the right stores in the proper order to maximize our savings potential on Black Friday.

I know: “Dan, don’t be a curmudgeon on Thanksgiving Day.” Received. Noted.

I wrote a couple weeks ago about humility in the wake of the 2012 election results. The more I think about humility and reflect on Thanksgiving Day, the more I understand this:

It’s funny how those two go hand in hand. Maybe the reason for so little humility in America is that we have forgotten how to be thankful. Maybe the largesse we have experienced for so long has short-circuited our ability to step back and see that God’s providence trumps our own efforts, with all our gains less under our control than the Lord’s. Because we make too much of our own work, we forget what it means to be humble.

And so the loop goes on and on.

More than anything, I want to be a thankful person. I don’t want to look on anything good I receive in life and say, “I deserve that!” Because I don’t. And neither do you.

If that doesn’t humble us, I don’t know what can.

Be both thankful and humble this Thanksgiving Day.

Almost a year ago, I wrote about 100 truths I’d learned in 30 years as a Christian. Every year I learn a few more truths about life and faith.

I consider this to be one of the most penetrating truths I’ve learned this year:

A man who lacks humility, no matter how gifted he might be , will have that lack taint everything good in his nature. On the other hand, a man who is humble will bolster the excellence of every positive trait he possesses.

God is holy. His holiness permeates every trait in Him. I believe that humility may be the equivalent transcendent virtue in men and women. It may be that this is the reason Jesus found pride to be so hellish.

Indeed, humilty may be the one virtue most lacking not only in Americans in general, but in American Evangelicals. I used to know many more humble people, mostly older. With that generation dying off, I fear that those humble folks have been replaced by a generation characterized by boasting and privilege.

Jesus must increase, while we decrease. I hope we learn this reality before it is too late.

Over the last few days, thousands of people have come to Cerulean Sanctum looking for answers concerning the meltdown in the charismatic movement in light of what happened at Lakeland. People are searching. They want answers and reassurance.

Here is the word that I have for them. It comes from a prophet who did no miracles but was called the greatest by the One who truly matters:

John the Baptist said this in context of knowing his ministry was not what mattered in the end. He said it because he knew he was being surpassed, because he understood his place was to shine the light on the Lord and not himself. His curtain had risen, but now it was falling. And John rejoiced in that.

Because John was, above all else, humble.

I do some of my best reflecting in the shower. Something about being alone and naked brings clarity. It’s quiet and peaceful. The whispered voice of God stirs among the waters. Or something like that. Whatever the case, my morning shower has been the birthplace for many a post here.

During Tuesday’s shower the word that God dropped into my heart was humility.

If we are to clean up the mess within the contemporary charismatic movement, above all else, we need to rediscover humility.

We need leaders who have been tested by the twin crucibles of time and tragedy. It’s those folks who speak softly who often possess the most wisdom, but among the noisy clamor of the modern charismatic scene we have drowned them out. We have ignored them because they are not flashy, hip, or “charismatic” in the other sense of the word.

I believe they are the ones who must rise up at this time in history.

We need people who understand the grace of God. People who, like Job, can stand before God and put their hands over their mouths because they understand that they are nothing in the presence of God. Yet that same God offers them mercy because they realize they are dust before Him.

We need people in the charismatic movement who, again like Job, are so concerned with the holiness of God and our tendency as fallen creatures toward sin that they make sacrifices on behalf of others who may have sinned so as to ensure that God has not been slighted. Fostering that kind of mentality will stifle excess before it has a chance to poison others.

I believe that charismatics need to stop promoting those people to leadership positions because of the force of their personalities or the novelty of their ministries. 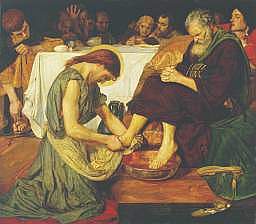 Instead, we need to seek out those who would otherwise have been forgotten, those who are not shameless self-promoters, but promoters of Jesus Christ. In other words, humble servants.

Do we remember the word servant ? Is it still in our vocabulary? Find me a servant who is dedicated to pouring herself out and who finds her filling not before adoring crowds but before God alone in her prayer closet and I’ll show you someone ready to lead.

Do we understand humility? Have we seen any signs around us that it still exists? Give me a man who would rather be wrong before millions of people than besmirch the character and name of Jesus Christ and I’ll show you a man worthy of his calling.

But where are those people in the charismatic movement in the West?

I see their counterparts in the East every Sunday in my church.  We support a number of native missionaries in Asia through Gospel for Asia, a charismatic missionary organization. Their pictures line the wall outside the sanctuary. For the most part, these are poor people who have nothing but their names written in the Lamb’s Book of Life. They live for Jesus alone. They are nameless, faceless people who have counted the cost and know that He is worthy even as they are not. They are the reason that the Gospel goes forth in power in developing countries even as we in the West flock to the next dog and pony show looking for the next spiritual fix.

They are people who understand that He must increase while they must decrease.

I used to meet people like that here in the States. Not so much anymore, though. Most of us have our own agendas. We squeeze the Lord in when we can, but it’s still mostly about us, about our families, about getting ahead in life.

When I told my Dad that I was going to go into ministry full time, he said something I will never forget: “Then prepare to be poor because you won’t get anywhere in life.” Ouch, right?

Still, that kind of statement doesn’t make humble people flinch because they know their treasure is in heaven, not on earth.

Have we American charismatics counted the cost? A quick look around would answer that question, and not in the positive. We are a proud, selfish people who look down on the publican beating his breast and say, “Thank you, Lord, that I am not like that sinner.”

The problem is we are like that sinner. We’re just not humble enough to admit it.

In closing, I wish to offer a few links to other sites with good words concerning the charismatic movement and what can be done to prevent further damage and how we might repair the broken down walls before us:

I like so much of what Frank Viola writes. He has many good thoughts here.

John Piper wades into the mess with his usual sense and sensibility.

Dr. Harold Bussell contributes some excellent thoughts on the evangelical susceptibility to being lured into cults and cult-like activities. Good warnings and wisdom here. In addition, he takes a look at authority issues as well, something that most charismatics need to heed, especially as everyone goes nuts over “coverings.”

On this issue of humility, the best book I have read on the topic comes from Andrew Murray, the South African pastor who oversaw a great revival in that nation during the 19th century. Murray reads like a kinder, gentler Jonathan Edwards, sharing many experiences with Edward’s own during the Great Awakening. Murray, an amazingly prolific author, should be required reading for all charismatics as far as I am concerned. To our great fortune, Murray’s book on humility is online in its entirety.

I mentioned Watchman Nee’s book The Latent Power of the Soul in a previous post in this series. Fortunately, that book, too, is online in its entirety. We can learn much from Nee’s understand of soulish power versus genuine Holy Spirit power. I suspect that if we stripped soulish power out of the contemporary charismatic movement very little Holy Spirit power would be left. And that should alarm us.

Rob McAlpine discusses what it means to be “postcharismatic.” (I believe, though, that it might be better to think of reform as being “precharismatic”. Also, in a case of horrid timing, it seems McAlpine’s publisher in Canada is forgoing releasing his book here in the U.S. on postcharismatic thought.  I would think this would be the perfect opportunity to ride the wave of confusion concerning this blowup within the charismatic movement.)

(Hat tips go to many people, some of whom I owe an apology because I have misplaced their names as sources. Bill Kinnon, though, had several good links at his site.)

Posts in the “Cleansing the Charismatic Crackup” series: