For most of my adult life, science had no idea what the purpose was for the human appendix. Sure, it got inflamed, infected, and sometimes necessitated removal, but that was it. A worthless, vestigial organ, not found in other mammals.

In the last 15 years or so, science has discovered that the appendix serves several functions. In the developing fetus, it operates as a source of specific endocrine cells that assist biological control systems. In adults, it has an immune system role specific to the gut, with additional lymphatic functions. And more recently, researchers have found the appendix serves as a warehouse for intestinal bacteria, able to reestablish healthy gut function after bouts with illnesses such as diarrhea. Lastly, doctors can use the appendix in urinary bladder reconstruction.

In short, the appendix has not one but several useful functions.

One of Paul’s most lingering illustrations in the New Testament is that of Christ’s Body being composed of many parts, some with less obvious functions. Still, all parts of that Body are useful. I suspect that many people in our churches today feel like the Body’s appendix. Or at least the appendix of old, when we thought it had no real purpose except to go bad and become life threatening.

It’s time we stop running our churches ignorant of the purposes of the people within our assemblies. If anything, we should devote more time to unlocking the functions of each person and gift in a church. No one in a church is a useless, vestigial organ. God Himself sees to that. It’s for His good pleasure and to the strength of the Church that each person should exercise his or her function within the Body of Christ.

What is holding those people back is our ignorance, sloth, and fear. And God detests that kind of faithlessness.

Anyone who’s read this blog long enough knows that I have continually warned that this country and the Christians within it are in for some lean, mean days ahead. “We are not ready” has been my clarion call, a warning I continue to see ignored by Christian leaders in this country. They seem absolutely oblivious to the last recession this country weathered, having learned no lessons on how to prepare our churches for going through tough times. I firmly believe those days are creeping up on us, yet we blithely go on, ready to be caught napping in what should be our shining hour of preparation.

And while I’m not so stuck on myself that I think my puny voice can sway Christian leaders, don’t any of them care? Even one smidgen?

I’m not ready to say the end is upon us, but it sure smells like Ragnarok around here. That term, lifted from Norse mythology, refers to the time when the gods fall. And if there’s ever been a time for us to stand back and ask if we puny gods are falling, 2008 seems an apt time.

We’ve moved the strength of our economy overseas where others now manufacture and create what we buy. Increasingly, even our food is foreign. Crippling debt, the prolonged demise of our most cherished industries, and our unquenchable lust for cheap goods are killing America, yet we can’t seem to snap out of our mania. When greedy corporate wolves are allowed to run amok through our economy, taking it all for themselves and leaving the middle class with an empty chicken coop, should we surprised that we’re bordering on economic collapse?

I find it bewildering that the tone of The Wall Street Journal has only recently turned pessimistic on our economy. The “R Word”—recession—is now cropping up in editorials, though some forward-thinking economists were saying in the fall of 2006 that the our economic strength was illusory. Real world wages continue to drop, and people are dealing with crushing increases in the cost of energy and food, which, last I looked, were staples of life.

I’ve been furious all week after reading a hopelessly clueless George Will editorial in which he decries politicians who pander to the “death of the middle class” adherents, especially within the middle class. I could care less about the political portion of that diatribe, but the astonishing elitism of Mr. Will, wealthy columnist and talking head that he is, just slays me.

We all know about lies, damned lies, and statistics, but c’mon! You don’t need a degree in math to see how frightening that is given cost of living increases over thirty years. A $30,000 household income from 1979 would probably translate into at least a $50-60,000 income today, so if anything, the number of households stuck at $30,000 from nearly thirty years ago is a massive indication that something is horribly wrong in the middle class.

Same goes for the $100,000 income. All $100,000 incomes are not created equal. If you live in the Bay Area of San Francisco, I can tell you from personal experience that $100,000 is just squeaking by. That may sound insane from the standpoint of those unfamiliar with the cost of living in other regions of the country, but trust me on this. I still freak when I note that a property like ours in some parts of the country would go for way over a million dollars. My wife and I lived in the Bay Area and the crushing cost of living stunned us. I’d like to take away all but a $100 grand of George Will’s income and plunk him down in Palo Alto, CA and see how much he enjoys being “rich.”

What an ivory-towered dingbat.

So The Wall Street Journal finally starts to cave and wonder where this mysterious talk of recession comes from despite the fact that wages for most people have been stagnant for years, some people are desperately clinging to their jobs, and the costs of housing, energy, and food have skyrocketed.

What pains me is the American Church’s joint inability to read these distressing signs. It’s as if they simply don’t want to see. Yet check out the passage that opens this post. The early Church prepared for problems. In fact, they listened to their prophets and sprang into action. But where are our prophets? And in lieu of prophets, why can’t we seem to heed our own common sense? Yet I can’t think of one major Church leader in this country talking about economic issues and how the Church must face them.

I had a pastor in Detroit last year send me an e-mail asking what was going to happen should half the people in his congregation become unemployed. This is no joke, folks. Who is speaking to that kind of scenario? What national pastor/writer/speaker is addressing what we need to do should it come down to that in our churches? With Chrysler and Ford teetering on collapse, that pastor’s flock may have more than just half its people in dire economic straits.

And don’t even get me going on this hellish piece of neo-con anti-Americanism called Real ID. I don’t hear anyone in the American Church talking about this little 666-let. I get a reprieve of sorts since I’m old enough to linger till the second wave of ownership of this mandatory national ID card. And by mandatory, I mean you won’t be able to fly on an Airplane after 2014 or enter a federal building without having one of these anti-Constitutional pieces of garbage. Some claim Real ID will be required for certain monetary transactions, too. Scary? Oh, I’m sure it will get scarier when they find a way to sell the current opposition by tying it to personal medical records. “Sir, what should happen if you get into a car accident and the EMTs don’t have access to your Real ID? Well, sir?”

Trust me; it takes a lot to push me into the cabal of conspiracy theorists.

I don’t care what your eschatology is, though; Real ID is a real nightmare, especially for Christians. Yet who out there is fighting this in the name of Christ? No one that I can tell. In fact, it’s the hardest-core liberals who are screaming loudest. I never thought I’d be bedfellows with the ACLU and some of the wackier environmental groups out there, but at least they’re actively trying to shoot down Real ID.

So I sit here typing wondering why the Church of Jesus Christ in America gives not one hoot about any of these issues. Have we become so numb? I’m not saying that we can stop a recession or prevent the erosion of our civil liberties on our way to a one-world government, but to not even stand up and be counted? And what about putting systems into place to help us Christians prepare to live through these trying times? Sure, some think we’re going to be raptured out of the mess, but the sword that is Pascal’s Wager cuts two ways.

What is wrong with us?

We are SO not ready. 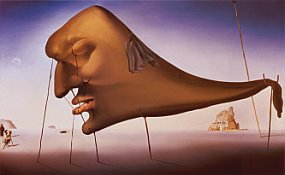 I’m so tired right now, I can barely type. I wasn’t going to blog this evening (I’m writing this around 10:30 PM on Sunday), but as I sat here bleary-eyed, a couple thoughts came.

We’re barely into a new year and the big “R” word—Recession—blares from the front page of the newspaper. The economy in my area is already on the downswing. Companies have frozen hiring in most cases. A quick look at Monster.com for my area shows a depressing increase in junk jobs (“Make Millions from Home Licking Stamps for Envelopes!!!”). Folks have that flinty stare, the kind of look reserved for bothersome teenagers blasting hip-hop out of their cars. Except folks stare off into nothing, as if to warn away life itself.

And it does seem to me like people seem stricken with tiredness, as if we could all hibernate and sleep through whatever it is that’s afflicting us right now. A Rip Van Winkle sleep. The sleep of the not-quite-dead, yet not-quite-alive.

But that’s the sleep of the damned, if you ask me.

We are the Church of the Triumphant Lord Jesus. It’s not time to be drowsy. It’s time to trim the wicks and check our supplies of oil.  The world may be in the throes of somnambulism, but we Christians can’t sleepwalk through life. We cannot allow the enemy to lull us to sleep through materialism, through the threat of losing all the cheap junk we’ve accumulated for ourselves, or through the threat of threats. The gates of hell were not built to withstand the onslaught of even one wide-awake Christian on fire with the Holy Spirit.

Do we believe that?

Tired? How can we be tired when we’ve been asleep for so long!

The old Christian band Harvest had an album called Only the Overcomers. If the times are threatening, it’s time for the overcomers to stand up and be counted.  It’s time to roll up the sleeves and get to work.

I asked last Friday about the pressing needs you all felt at your churches. I ask now: “What’s your next step?” How will you overcome that issue? How will you be the source of change for the better in your church?

Because the days aren’t growing any brighter. The Bible promises that darkness is coming. And we also know that when darkness comes, the tendency is to sleep. It’s natural. That’s what the world will be doing, just more so.

What will the Church be doing?