“Everyone loves a circus.”

Or so it is said.

You want a circus? Follow the link and read the posts on Facebook regarding the passing of Trinity Broadcasting Network co-founder Jan Crouch.

If you become disoriented and never make your way back here, I’ll understand. No hard feelings.

You have the adoring masses who called her “Mamma Crouch,” and who felt compelled to send TBN their “grocery money” as a tithe, because despite the Marie Antoinette-levels of gaudiness and gilded Rococo glitz evidenced on the hallmark “Praise the Lord” program, TBN seemed perpetually low on turnips and Cheetos.

You have the men (mostly) who have a form of godliness but deny its power, who seem incapable of not getting in one last dig about some “charismatic leader,” because the only thing sacred to them is their own rightness. And strange fire. Lots and lots of talk about that.

You have the folks who talk incessantly about the Gospel, yet at the same time they can’t help but comment about the spiritually blind Mamma Crouch people who have this weird idea that if they have enough faith in God, anything is possible. Because it’s childish to think that faith can move mountains. “You see any mountains move lately, Buddy? No, I didn’t think so. Now go back to waiting to die so you can go to heaven.”

You have the hardcore Pentecostals that see TBN as a mighty force for Truth, Justice, and The American Way, promulgators of genuine Kingdom Living, advancing the Cause of Christ against the bulwarks of the Enemy in this End Times Dispensation. Hallelujah. Oh, and Creflo needs a big jet.

And lastly, you have all the comments from homosexual men and drag queens, who saw Crouch’s purple hair, Cleopatra-inspired makeup, and “Stevie Nicks gone pink” fashion sense as a life-changing inspiration, though probably not in the way Crouch intended.

I could post a picture of Jan Crouch here. I could, but I won’t. You probably saw enough at Facebook.

I don’t know what to think about Jan Crouch and her husband, Paul, who died in 2013. As a young charismatic, I sometimes watched TBN to catch Christian music videos (“Real Videos,” anyone?) and to see if I could find something, anything, that showed what genuine Holy Ghost Christianity looked like. I found something else instead.

I do know this…

TBN presaged the slow turning of the Church in America. If anything, its success led to copying—if only tangentially and with massive denial of any hint of doing so—of its model. That glitz and showmanship crept into the larger Church, and larger churches was what it all became. Expand, take in money, and expand some more. Lasers. Disco balls. High-energy worship leaders. More, more, more. What we saw in TBN and decried, we saw in the wider Church just a few years later and embraced.

I have only one thing to say about all of this.

More than anything else, I want to start walking. I want to walk and walk until I can find some quiet place by a lake, where the breeze blows crisp and refreshing off the still waters, and I want to lie down on the shore and say, “God, I’m here. Please be with me. I need you so much.”

I don’t want a church that—no matter where you go or which denomination you turn to—feels like the same dog and pony show.

Somewhere, in the so-hard-to-find stillness, I just want to be where God is and dwell there in His embrace.

Maybe you do too.

Over the weekend, the Christian broadcasting world lost one of its most powerful leaders when Paul Crouch of TBN died Nov. 30 at 79.

Anyone who has read Cerulean Sanctum knows I am not a fan of TBN, largely because it was indiscriminate in who it gave airtime to. For every Jack Hayford or Kirk Cameron featured on its programming, there was Benny Hinn or T.D. Jakes.

And then there was all the garish opulence and money, much of which was spent in ways I’m pretty sure Jesus would not have condoned.

From a TV broadcasting standpoint, though, few can argue with the success of what Paul Crouch built almost singlehandedly. Some might contend that one did not need to be a broadcasting genius to blow through millions of dollars generated through prosperity gospel teachings, but still. In it’s prime, TBN was a force to be reckoned with, and despite some fall-off from its glory days, it remains the largest religious TV network of any kind. At one point, I used to watch TBN because it was the only place one could see Christian music videos. As a popularizer of the Christian subculture through media, Crouch and TBN were both shrewd and peerless.

What will be the legacy of TBN and Paul Crouch? I find it hard to say. Certainly, TBN put Word of Faith and its teachers in a bigger spotlight. Even if Oral Roberts had been the real forerunner in that regard, Crouch perfected it. Those unfamiliar with Pentecostalism got an eyeful and earful of it through TBN, and I’m certain that some of TBN’s broadcasting had an influence on African nations and the religious trends toward Pentecostal Protestantism both there and in South America.

For me, Paul Crouch is a conflicting character, and I don’t know what else to say about him and the television ministry he built. There really is no real contender for that Christian broadcasting throne, and with Pat Robertson hitting 83,  the last formidable challenger for Crouch and TBN may also be exiting center stage shortly.

And Nadab and Abihu, the sons of Aaron, took either of them his censer, and put fire therein, and put incense thereon, and offered strange fire before the LORD, which he commanded them not. And there went out fire from the LORD, and devoured them, and they died before the LORD. Then Moses said unto Aaron, This is it that the LORD spoke, saying, “I will be sanctified in them that come nigh me, and before all the people I will be glorified.” And Aaron held his peace.
—Leviticus 10:1-3 KJV 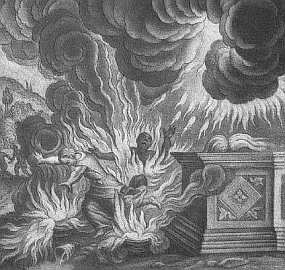 A couple weeks ago in church, I was talking with some small group friends when a woman approached us and regaled us with stories of a massive revival going on down in Florida. She said it was all over the TV (*cough*, TBN, *cough*). Said hundreds were getting healed. (Okay, good.) Said the gifts were operating powerfully. (Also good.) Said people were coming from all over the world to attend. (Not sure what to think about that, since fads can pull in people, too, but okay.) Said God was giving people gold teeth. (Yikes!)

A few bloggers/writers are discussing this “revival” (here, here, here, and here) and all the typically charismatic hoopla that attends it. The descriptions seem all too familiar.

Me? My hackles are up. I’ve been around enough real manifestations of the Holy Spirit to know that something is odd about this “revival.” I was never a big fan of the so-called Toronto Blessing, had a boatload of reservations about the Brownsville Revival, and now this.

Here’s my take on the revival in Lakeland:

1. All true revival is marked by one overarching, indisputable reality: People are driven to repentance. And not “Me too, me too!” repentance, but the kind that soaks the carpeting in tears of holy remorse for sin. Any revival that is not first and foremost preceded by and given over to repentance is not a Holy Spirit-ordained revival. The number one fruit coming out of any revival will always be fruits of repentance. And those fruits remain. They don’t vanish six months after roadies pack up the revival tent; they last a lifetime. Want to gauge who’s behind this revival? Watch for fruits of repentance. If everything but repentance is visible front and center stage, then it’s not a revival from God.

2. There’s no fool like a charismatic fool. And I say that as a charismatic. Too many charismatics drink from poisoned wells only to clutch their guts in pain later, asking what went wrong. What went wrong is that no one was bold enough to test the spirits to see if they were from God. Want a wise foundation for that kind of discernment? Start right here.

3. Whenever the emphasis gets off Jesus, a revival’s focus is off target. The Holy Spirit always pulls people to Jesus. He doesn’t pull them toward angels, canny preachers, or displays of spiritual gifts. He doesn’t need gold teeth, gold dust, and angel feathers to point people to Jesus. (Those are illusionist and occultist tricks.) He just needs himself because He is sufficient to do the pointing. Real revival isn’t about what you or I want, but what Jesus Christ wants.

4. When the sons of Aaron offered “strange fire” before the Lord, their offering was probably close to what it should have been. After all, they knew the formalities. The problem was that close doesn’t count except in horseshoes and hand grenades. God doesn’t put up with close. His worshipers worship Him in Spirit and in truth. And there’s no “almost” in truth. You want “almost” when it comes to truth? Consider Satan; he’s a master of the almost truth. If we’ve got experienced charismatics at a revival with folded arms and scrunched brows saying, “Well, you know…,” then it’s strange fire.

5. Real revival doesn’t just draw one kind of Christian. It draws everyone. It draws Episcopalians, Lutherans, Reformed, Presbyterian, Nazarene, Brethren, Mennonite, Methodist, Baptist—everyone. And not just Christians, either. Real revival pulls in hundreds of the unsaved and the cultists. Real revival spills out of the cup that first held it. It rains down on whomever is near because God doesn’t discriminate. He’s an equal opportunity anointer of those who wholeheartedly seek Him.

That’s what I have to say about this “revival” in Florida. You can take my comments for what they’re worth.