As demonic activity ramps up, the last gasp before the coming of our Lord, we will hear more talk of spiritual warfare, especially from the usual sources. We will be told how to “map” principalities and powers. “Prophets” will instruct us how to pray special prayers to fight these powers and take dominion over what was stolen by the Enemy. We will hear all sorts of wild things, most of which have no basis in the Bible or in Church history.

The following Bible verses are absolutely true and right:

The reason the Son of God appeared was to destroy the works of the devil.
—1 John 3:8b

Put on the whole armor of God, that you may be able to stand against the schemes of the devil. For we do not wrestle against flesh and blood, but against the rulers, against the authorities, against the cosmic powers over this present darkness, against the spiritual forces of evil in the heavenly places. Therefore take up the whole armor of God, that you may be able to withstand in the evil day, and having done all, to stand firm. Stand therefore, having fastened on the belt of truth, and having put on the breastplate of righteousness, and, as shoes for your feet, having put on the readiness given by the gospel of peace. In all circumstances take up the shield of faith, with which you can extinguish all the flaming darts of the evil one; and take the helmet of salvation, and the sword of the Spirit, which is the word of God, praying at all times in the Spirit, with all prayer and supplication. To that end keep alert with all perseverance, making supplication for all the saints, and also for me, that words may be given to me in opening my mouth boldly to proclaim the mystery of the gospel, for which I am an ambassador in chains, that I may declare it boldly, as I ought to speak.
—Ephesians 6:11-20

Nonetheless, I get a bit frustrated by those who are deeply into spiritual warfare and dominion teachings. Why? Because those teachings and teachers verge on the sales techniques of gnosticism, 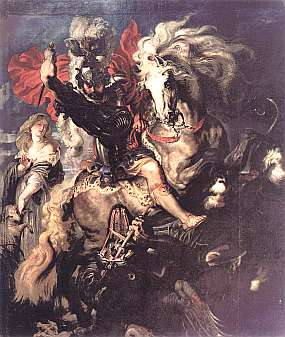 always promising some “deep” or “secret” teaching only the “true prayer warriors” will know.

No doubt, one can learn to pray more effectively against the demonic, but there’s a point where all the supposed secret teachings—usually imparted at an expensive workshop or conference—do nothing more than detract from the one genuine secret of powerful spiritual warfare and dominion.

Right now, I will tell you the real secret of destroying the power of the Enemy. I’ll impart, for free, the secret that rightfully removes more “territory” from Satan’s hands than any other tool. And it’s the one real secret no one will talk about at the $250 conference on spiritual warfare and dominion.

You ready? Because I’m going to tell you. So prick up your ears.

No power, secret wisdom, or prayer destroys principalities and powers more effectively than ripping the talons of the demonic off the necks of the lost. Want to take dominion for Christ? No territory is more valuable in the eyes of God than a lost soul. If we want Satan to know our names, he’ll know them full well if we’re actively working to depopulate hell.

Yes, Jesus came to destroy the works of the devil. But He also came to seek and save the lost. Funny how those two combine, isn’t it?

Yet I can almost bet that for every 100 attendees at some pricey workshop on spiritual warfare, maybe a handful of people attending are evangelizing the lost on a regular basis. More likely, the vast majority are looking for one spiritual high after another, chasing after experiences and esoteric wisdom rather than getting out there and actively sharing the life of Christ with someone who does not know Him.

Because the Enemy wants nothing more than to distract people into spending hours and hours scrying principalities and powers, attempting to find the demonic “city limits” around this place and that, while 4,212 people every day enter the gates of the eternal city of the damned.

16 thoughts on “The Real Secret of Spiritual Warfare and Dominion”