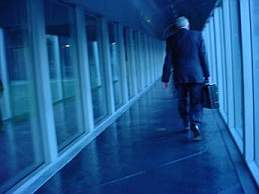 At a small group meeting this weekend, we watched a video on bettering one’s marriage. One of the comments the speaker made concerned finding one’s purpose in God, and that this purpose comes from no one else.

And this bothers me. Not because it’s not true, but because one of the most common discussions I have with other Christian men concerns their nearly universal sense of purposelessness. In fact, I would say that at least 70 percent of the Christian men I know have this nagging feeling that they’re not doing what they are supposed to be doing. And this usually means in their careers, in their walk with the Lord, or in both.

I brought this issue up in the discussion that f0llowed the video, and the general response was that men who felt that way were not close enough to God or else they wouldn’t feel that way. God doesn’t leave people twisting in the wind, they say.

Sadly, I think that’s the common perception. But I think there’s a deeper issue here.

Many of the Christian men who struggle with their sense of purpose do so not because they haven’t already caught a vision from God, but because they have. The problem there is they have no sense of how to make that vision a reality, especially when confronted with a common set of dilemmas. Ask a Christian man who struggles with purpose what he suspects the problem might be, and I believe he’ll give you one of these five answers:

1. His wife doesn’t support his vision

“Hon, I think we ought to sell our 5,000 square foot home, move out of the gated community, and buy a tiny brownstone apartment in a poor neighborhood downtown so we can minister to the underprivileged.”

In a lot of households, such a proclamation would exemplify the phrase went over like a lead balloon. In a few, it might also spell divorce.

I think a lot of men who catch a real vision from God see it die on the vine right here. If the wife doesn’t agree, that’s the end of it. Better to keep her happy and stay in the megachurch with all the best people rather than risk her cutting you off—and some of you know what I mean.

While this may not be true for all men, it’s true for enough. It may even be true for you, but you’ve been afraid to tell anyone.

It’s a sensitive issue, isn’t it? Lots of possible damage if handled poorly.

But then, consider Job and his wife. What would have happened if he had listened to her rather than sticking with what he knew was the right thing to do? (For all their talk of men being prophets, priests, and kings, Evangelicals seem to go mute when Mrs. Prophet/Priest/King objects to her hubby’s vision for the household.)

Still, most men aren’t as righteous as old Job or as steeped in their convictions. So the vision goes on hold. And with it comes that nagging sense of purpose gone missing, a relentless ticking clock, and more frustration than some men can bear.

2. Following the vision may mean a non-traditional upbringing for his children—one that may be generally disapproved of


You have to have your kids in private piano lessons, select sports teams, Chinese language tutoring, and on and on so the little darlings can make it into an Ivy League school right? Isn’t that what Focus on the Family teaches?

What to do then when God gives you a vision that may take you and your wife to the jungles of Africa while your kids stay behind in boarding school?

People chosen by God to do a special work used to do that, though. And their kids grew up to be normal and happy in about the same proportions as kids today whose parents would kill to get them into Harvard, ministry be damned.

I read a story of a family that packed up their eight kids into a car and traveled around the country singing in churches or wherever people would have them. No RV, not even a sense of where they would sleep for the night or where the money would come from, they counted on God to provide food, clothing, and shelter.

That would get you tarred and feathered in some churches. You’d be called every lousy parent name in the book, and then some names people would coin just to spite you in particular. Some withered prunes might even call the government down on your head and accuse you of child abuse. Bad, dad!

Somewhere, someone’s sharpening the knives for a man who discusses that kind of greater vision. And rather than risk being publicly eviscerated, that man backs down, and his sense of purpose goes kaput for the sake of the “perfect” Evangelical nuclear family, no matter what Luke 18:29-30 says.

3. His church, the one he’s been a part of since forever, disapproves

MAN: “I’d like to start a church ministry to the local gay community.”

MAN: “Evangelism and outreach. We could begin by inviting some from that community to our church functions, like the next father/s0n baseball game.”

LEADER #2: (Also nervously) “But that’s next month. And it will expose our kids to a sinful lifestyle.”

LEADER #3: (About to wet himself) “Yeah, sometimes, I guess. Still, I’m not sure our people are ready for that kind of…uh…”

LEADER #2: (Claiming to be wise) “At this point, I think we need to table this measure for our next leadership meeting and discuss it privately.”

MAN: “Does that mean I should come back then?”

LEADER #3: “No, the leadership team will talk it over privately and we’ll let you know.”

A couple years later, that man is still waiting.

4. He’s hit with “If you’re providing for your family, spending time with the wife and kids, attending church weekly, and involving yourself in a church-sponsored ministry activity once in a while, why would you possibly feel a lack of purpose? That’s the dream Christian life right there.”

Well, it’s the dream Christian life according to some folks. Not all would agree. In fact, in a lot of ways, it doesn’t vary much from the “self-serving” life of the average pagan, except that instead of church, Mr. Average Pagan is in the Kiwanis Club (which in some cases may be as involved in helping others as the local church).

Some men dream bigger. They’re thinking outside the church box. And like the proverbial square peg, others are trying to jam them into a cultural Christian round hole.

Isn’t it odd that Evangelicals laud men like Hudson Taylor, Jim Elliot, and Eric Liddell, then turn around and repeat the words above to other men? What would have happened to those heroes of the faith had they heeded the words above and exchanged their vision for one of average suburban Christianity?

5. He pursued a vision once before—and failed

Does a genuine vision from God ever fail?

That’s a question some are not willing to deal with honestly. Do God-honoring churches fail? Do Christian companies go out of business? Do Christian marriages end up in divorce? Does the long-prayed-for child born to the long-childless couple get sick and die? Does the pastor who loves Christ with his whole being ever get lynched by the very congregation everyone agreed he was called to serve?

Nothing crushes an earnest Christian man more than to step out in faith and get steamrolled by a sin-filled world. And too often, in the aftermath of that failure, people won’t let him forget that the thing he longed to do for God more than anything somehow didn’t turn out. In many cases, the pain is amplified because others spiritualize the reasons for that failure and use the sanctified explanation against him, which only makes his reluctance to follow a new vision even more paralyzing.

I’ve known a lot of good, God-fearing men who have been stymied by one or more of the five items listed above. These are not stupid, lazy, cowardly, weak-faithed men. They’re just finding that the very people or situations that are supposed to be most helpful to them are actually not. Those men may very well have a genuine vision that will lead to the ultimate purpose of God in their lives, yet they fear they may never get there, finding themselves stuck in a gray place with no easy answers.

If that’s you, please drop me a line. I want to pray for you. I can’t promise a solution to your situation, but I can pray. God may indeed step in and clear that pathway so you can finally walk in your God-given vision.

My word to you is Don’t give up. I know the pressure on you is enormous. You have so many people to satisfy, well-meaning Christian people who may not understand your vision. Please, don’t give up.

God can make a way where there is no way. It may mean laying down more than you are willing to sacrifice at this time, but God can mold you and take you to that place of ultimate sacrifice.

God is good. And He’s given you a vision. Trust Him for the fulfillment.