That’s no ordinary rabbit! That’s the most foul, cruel, and bad-tempered rodent you ever set eyes on!
—The Wizard Tim, Monty Python and the Holy Grail

Santa Claus I can deal with. The Easter Bunny drives me nuts, though.

At least with Santa you can trace him back to an old Christian saint. The Bunny, however, exists solely as a fertility symbol that has been traced back to the murky, disputed goddess Eostre and pagan celebrations of springtime among Germanic peoples.

It’s possible to play down Santa Claus for Christmas. But the eggs, chicks, and bunnies are everywhere.

Last weekend, my son won a game at the YMCA that was manufactured by a historically conservative Christian publishing house. 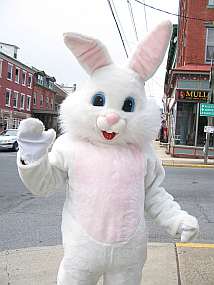 The game talked explicitly about the Resurrection, but it married Easter eggs, chicks, and bunnies to that story so intimately that it was impossible to extricate the two. In the end, it came down to battling messages, Jesus’ gory and brutal, with the bunnies’ all warm and cuddly.

Though I had an Easter basket as a child and participated in more than my fair share of egg hunts, I didn’t become a druid. I don’t go on a yearly pilgrimage to Stonehenge.

Still, it bothers me that it is so hard to cut through the competing messages to find what is real. My own son seemed to get plenty geared up for egg hunts and bunny-related ideology, but the resurrection didn’t garner the same enthusiasm.

“Our triumphant holy day” is how my favorite Paschal hymn labels it. That the highest holy day in Christianity must compete with foggy imagery from a forgotten diety of questionable origin bugs me to no end.

Unlike some other nations where a dictator makes proclamations that determine practice, Americans watch what is best and brightest in our culture and body politic erode through the constant dripping of one watery drop of concession after another. In time, the end result is a canyon. Our reaction? “Wow, now where did that come from?”

Maybe I’m just an excessive, joyless crank, but when you see the end result, when it becomes impossible to separate the resurrection of Christ from bunnies and chicks, it’s hard not to think that the goddess and her barnyard have won the war in the hearts of too many people.

57 thoughts on “Bunnies at the Tomb”