A couple weeks back, I posted that one of the Enemy’s tricks is to stoke the fires of wanting more (“Tangleknot on Leading the Opponent’s Subjects Astray“). In that desire for more, Christians may even make the mistake of overdesiring to grow deeper in the Faith.

Well, it’s a bad thing when it leads to spiritual lust.

Lust happens when all the boundaries that normally hold good gifts in check fall away, leaving a naked core of desire that knows no limitations. It’s playing the piano—by dropping bricks on the strings. Performing that way may make a sound, but it’s noise, not beautiful music. It’s a misguided approach. Should one want to play the piano correctly, one should play it as its design demands it be played. And as any skilled pianist can attest, one does not go from “Chopsticks” to Carnegie Hall overnight.

Spiritual lust occurs when Christians in their desire to know God violate the design He created by which we can know Him, grow in Him, and develop intimacy with Him. In the desire to know God, people inflamed by spiritual lust can instead find themselves drawn away from God because they violated His means of approaching Him. They become moths drawn to a flame, plunging down the pathway toward strange fire.

Spiritual lust is a kind of addictive behavior because it will drink whatever it can find to feed the thirst.  A little or a lot, it doesn’t matter. Nor does the quality of the spiritual experience or its rightness in the eyes of God. Spiritual lust makes demands that must be filled, no matter the expense. 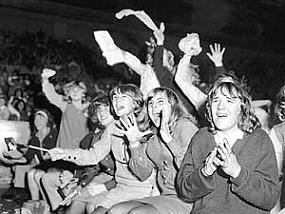 That addiction often leads Christians into pointless searches for truth in places where no truth (or precious little) can be found. A prospector looking for gold nuggets would not likely find them examining the contents of a septic tank. Yet this is what some Christians do when they go on quests to find the truth of God in other religions. Or it’s what too many charismatics do when they hop a jet bound for the far side of the world to bask in some new “revival” rather than finding God right where He has always been. Some Christians will tolerate all manner of skubalon in hopes of finding some tiny morsel to feed their spiritual rapaciousness.

The sad truth is no path to deeper intimacy with God exists than the old-fashioned ways found through the classic spiritual disciplines of the faith. We can’t help but grow in the Lord if we pray, study, meditate, fast, embrace solitude, practice submission, live simply, serve others, worship, confess our sins, seek guidance from the Lord, and celebrate.

Too many Christians want faster methods than those. Or they want whatever’s “new.” But both of those are simply spiritual lust. And God will never be honored through lust of any kind.

Spiritual infatuation tangentially connects with spiritual lust, but in a different way. It’s what happens to Christians who begin to veer into spiritual lust, but who sidetrack quickly because they find what they believe to be the perfect object of their theological affection.

Just as we old fogies get a whimsically nostalgic smile on our faces when we see a young teen utterly smitten with another, so it is that we recognize the signs when a young Christian has discovered a truth for the first time. How many times have we seen others find a tiny nugget of truth they then use as the sole basis for constructing elaborate theologies? How often do we run into other Christians, even older ones who should know better, who are infatuated with one truth to the point that all other godly truths become irrelevant?

I have many friends who are involved in the International House of Prayer (IHOP). IHOP has built much of its teaching foundation around Mike Bickle’s concept of Bridal Theology, connecting the Song of Solomon to Revelation’s depiction of the Bride of Christ.

Though I have grave concerns regarding Bickle and the Kansas City Prophets movement he came out of, I think that the Bible does show that God has a profound love for us akin to that of a groom for his bride. We Christians can be encouraged by this understanding.

But a problem swiftly rises: Building an entire theology off bridal imagery leaves out a big chunk of the rest of the Bible. Doing so avoids other perfectly legitimate explanations of the Gospel. It also forces proponents to keep expanding the morsel, blowing it out of proportion to its basic reality. Think how easily infatuated kids gush about their objects of affection, inevitably magnifying the character of that person to superhuman—and clearly mistaken—levels. After awhile, the voice of reason no longer penetrates the gauzy dreams erected by the infatuated. The infatuated filter their entire experience of reality through their infatuation. And we all know where that leads.

But before some of you high-five each other and yell, “Dude, Edelen totally dissed IHOP,” let me offer a different subject: atonement. A gnarly subject, yes?

Many reading this will defend a penal substitutionary view of atonement to the death. I, myself, believe in a penal substitutionary atonement. That said, I will also claim that some of the other views on the atonement (such as the ransom, governmental, Christus Victor, and satisfaction views ) all have some very good points going for them. In fact, it may even be possible—at least as I see it—that all those views work together in synergy much the same way that the four Gospels reinforce each other and give us a more complete understanding of Jesus.

Trust me, too many of us take them to their extremes.

All of us suffer from some amount of spiritual lust and spiritual infatuation; it’s part of the human condition. That said, we don’t have to be complacent about this tendency. True growth in Christ comes when we seek Him rightly, discern truth from error, and allow Him to show us how our infatuations may be keeping us from knowing Him by His design and in His time.

19 thoughts on “Spiritual Lust and Infatuation”