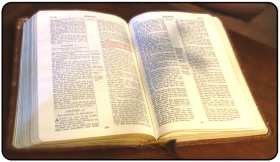 Growing up in the American Lutheran Church, you had one version of the Bible: the Revised Standard Version (RSV). When our pastor read from the pulpit, the RSV sang to me. Later, kids in the ALC got exposed to The Good News Version (AKA Today's English Version—TEV). But that came after my confirmation, so for me, RSV was The Word.

I memorized most of the Scriptures I know today out of the RSV, using a Harper Study Bible. Went through The Navigators Topical Memory System, a couple sets or more, all in RSV. I'd recommend the TMS to anyone.

But I can't recommend the RSV because they don't print it anymore.

It's a huge frustration committing to a version of the Bible only to watch it fade from use. AV1611-KJV-only adherents will probably hoot at my dilemma, but the fact remains: Bible versions that go "out of style" represent a thorny problem for people. Anything I memorize now won't jive with the memorized RSV passages I already know. And when I pull up those old RSV passages, they sound wrong since no one quotes RSV anymore.

My son and I read a Good News together. I love the remarkable line illustrations and so does my son. Several years ago, I read through the entire Old Testament in the TEV, and I loved the simple flow of the words (though the translations of the Psalms left a lot to be desired). For a child, the TEV is a Bible that works on several levels.

But I can't recommend the TEV because they don't print it anymore.

I've actually not started my son on intense Scripture memorization (no nasty comments, please) for this simple reason. I'm bothered by quoting a version that doesn't exist anymore, so I'd prefer him not to have to deal with that problem himself.

I sold Bibles for a living at one point in my jack-of-all-trades life. Zondervan had to create a new quota category for me because I sold (the then new) NIV Study Bible like no one else. They posted a sales contest at one point and I sold so many that they gave me their top model, a Moroccan Goatskin version that cost almost $200.

So I know Bibles.

What I don't know is how to reconcile the Edelen family's Bible dilemma.

My main Bible is a Zondervan/Kirkbride Thompson Chain Reference NIV from the ill-fated NIV alliance of those two companies. Hardback, too, since that was the first model offered. A hardcore Thompson Chain fan after encountering a KJV version of it, the idea of getting the relatively new NIV in a Thompson Chain made my mouth water. Nearly twenty-five years later and that old Bible's STILL holding up.

I'm not limited to one Bible, though. I have a plethora of versions at my disposal. I use a very handy NRSV Greek Interlinear at Bible studies, and I love to read for pleasure out of the energetic Phillips NT Translation. To me, no translation can match the astonishing flow of phrasing found in the Jerusalem Bible, thanks to J.R.R. Tolkien being one of the English advisors on that Catholic (horrors!) version. The Psalms never sound better than when read in the KJV. And the NKJV offers a solid translation that maintains some of the KJV's grace and none of its archaic English.

Here at Cerulean Sanctum, most of the Scripture verses I quote are English Standard Version (ESV). It's the closest I get to the old RSV.

So I use an NIV primarily, my wife's a longtime NASB reader, and my son reads from the TEV. At our church, they use NIV and KJV. We get a lot of The Amplified Bible (or as I call it, "The Multiple-Choice Bible") and The Message (which sounds dated already and has a host of other problems) in some of our small groups

Though I agree with the original translators in their preface to the 1611 KJV that a number of translations are required for thorough study of the Bible, it bothers me that we're creating this environment where countless translations exist, but everyone's using something different. Most small group Bible studies suffer from too many translations. People show up with a half dozen versions and the next thing you know, a simple passage winds up muddied, especially when the people in the study aren't experts in Greek and Hebrew (as if any ever are).

Too much of the babel we confront exists for no other reason than marketing. Each Christian publishing house has a fiendish urge to market their very own translation, gambling that it will strike a chord and become the next NIV. What else explains Holman (Holman!) drawing up their own translation? Zondervan pretty much owns the NIV, Thomas Nelson's got the NKJV, Tyndale the NLT, Crossway the ESV, and on and on. And the NKJV isn't the only KJV refresh; at least a dozen others exist, including the MKJV, KJV2000, and KJV21.

The list of English Bible translations is reaching an epic length. I'm not happy with that arrangement, but what to do?

My wife and I enjoy Jack Hayford's teaching. At our church, many people use his NKJV Spirit-Filled Study Bible from Thomas Nelson, and my wife's expressed interest in getting one for her own study. Hmm.

I'd like to go in the ESV direction since it's closest to my RSV upbringing, but honestly, I've really loathed what Crossway has done with the overall design choices of every ESV Bible they've released. The typefaces look terrible and are hard on my eyes, the paper's too thin, the references limited, and on and on. Plus, worst of all, there's no Thompson Chain ESV and probably never will be if my last call to Kirkbride is any indication. Yeah, Crossway has slapped some really funky covers on their ESVs, but if the insides look bad, who cares?

And then there's my son to consider. I mean, what's with the translations they're giving kids today? Ten years from now, do I want my son evangelizing others from memorized Scripture by pulling up International Children's Version (ICV) text written to a third grade reading level? By no means!

So what to do.

I'm considering making the switch to NKJV. My wife gets her Hayford study notes, I can have a Thompson Chain, and my son…well, hmm—again.

My son's only six, but reads at a fourth or fifth grade reading level, so he might be able to handle the NKJV. But that thorny issue of revision rears its ugly head again. The most recent NKJV goes back to a 1984 update. Will Nelson one day do to the NKJV what Zondervan did to the NIV by bringing out the terrible TNIV. Probably.

Poor kid. I don't have a good answer for him.

What are your insights into this issue? Readers, here's a chance for you to sound off.