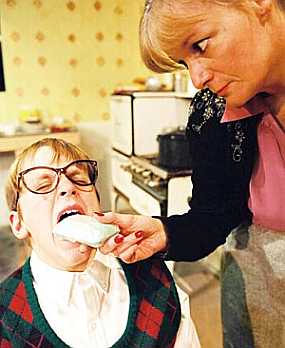 On the heels of my post yesterday about confronting the F-word comes my response to the hubbub about Pastor John Piper’s comment at a conference that sometimes “God kicks our ass.” Wayne Grudem felt led to jump into the fray concerning Pastor John’s potty mouth. And, of course, half the Godblogs in my sidebar links could not resist the compulsion to comment.

I guess I can’t, either. My reaction: yawn.

This is the kind of Evangelical rathole that makes Christians the laughingstock of the world. We’re not seen as a joke because we follow a risen Christ, but because we’re so obsessed with filtering out gnats while gorging on camels. When the lost can see it and we can’t, does that honor God at all?

And the tongue is a fire, a world of unrighteousness. The tongue is set among our members, staining the whole body, setting on fire the entire course of life, and set on fire by hell. For every kind of beast and bird, of reptile and sea creature, can be tamed and has been tamed by mankind, but no human being can tame the tongue. It is a restless evil, full of deadly poison. With it we bless our Lord and Father, and with it we curse people who are made in the likeness of God.
–James 3:6-9 ESV

Reread that italicized portion. Therein lies all you need to know about “those words.”

You see, real profanity is not contained in a word found in a dictionary. Words only have power when they possess intent and direction. The very fact that many Evangelicals equate cursing with saying a naughty word shows how we’ve lost all wisdom. A true curse has the intent of damaging another person. It’s a wish the sayer hopes to see come to fruition. In a way, it’s a kind of magical incantation designed to wound.

That we’ve so fully jettisoned that understanding is why people get upset about Piper’s comment.

Let me make myself clear. Piper saying that sometimes “God kicks our ass” isn’t profanity, by any means. On the contrary, if I need to hear that God’s going to kick my ass, then please tell me and use the strongest words possible! The word ass here doesn’t matter one way or another. What matters is whether we are cursing our brother. And Piper clearly was not doing so.

This is why many of the very people who get all flustered over a word like ass are the same people who are likely to say, “You’re a wicked heretic, and God is going to punish you.” No “bad words” uttered, but the direction and intent of the words are meant to attack another human being. If those words are true and inspired by the Holy Spirit who can see into the hearts of all men, then no foul. But if they are not, they bring destruction upon a person made in the likeness of God. They are a curse.

We Evangelicals simply do not grasp this. Any casual glance around the Godblogosphere every day shows one Christian cursing another. Comment sections in Godblogs are filled to the brim with accusations of heresy, cutting remarks, and snide assertions about other commenters’ eternal destination. In the vast majority of cases, those words are curses against a fellow brother or sister in Christ. Yet not one of George Carlin’s infamous “Word You Can’t Say on the Radio” is ever uttered.

The unbridled tongue that God hates isn’t the one that says, “God kicks our asses.” It’s the one that says, “The guy in the cubicle next to mine at work is a real ass.” There’s no cursing in saying, “I will die.” On the other hand, “I hope you die!” is a curse before God when said against another human being.

All this hoopla comes off as just another case of Evangelicals missing the point in their rush to appear holy. Do we think that 80 years of never uttering a “dirty word” is going to look good in heaven when every day we tear down another person with our supposedly clean words?

God forgive us for missing the point!

28 thoughts on “Words, and How Not to Use Them”