In my Dad’s childhood days in Price Hill, a tough neighborhood in Cincinnati, he lived next door to the Roses. Like the neighborhood, his neighbors were a gritty sort of people. In a wager over a pair of steel-toed boots, that neighbor boy shot my Dad in the foot with a .22 rifle. Fortunately for Dad, the steel in the toe of his boot caved but didn’t allow the bullet to pass through. They built things better back then, I think.

That boy went on to become quite a football player in his day, but that wasn’t the sport that earned him the moniker “Charlie Hustle.” Yeah, that Rose—Pete.

Despite the fact that he could have done my father a serious injury all those years ago, Pete Rose was my boyhood idol. I had posters of him all over my room. He epitomized a hero through his work ethic and lived up to his nickname. He was one of those granite-jawed, working-class, westside Cincinnatians, people who could wither you with a gaze, but who were the choice picks if you needed to storm the gates of Hell.

When Rose nearly killed Cleveland Indians catcher Ray Fosse in that infamous final play of the 1970 All-Star game (in Cincinnati, BTW), I was watching the game and just went wild. My hero scored the winning run. Didn’t matter that Fosse was never the same after that play. Rose did what Rose had to do. That was Rose. He played the game hard. That’s what made him the all-time hit leader, nearly saw him catch Joe Dimaggio’s consecutive hitting streak record, and gives him the near mythic quality he enjoys in Cincinnati.

Now if only there wasn’t that betting on baseball thing.

I say that because Rose’s betting on baseball pretty much ended whatever hero-worship he enjoyed from me. That was the first in a series of “welcome to reality, naif” disappointments with that saw the young adult me pretty much abandon the whole idea of finding heroes in celebrities of any kind.

A recently deceased Christian rock musician is garnering a bit more attention because of a scandal. It’s a bad scandal, though, in a way, it should surprise only those people with a whacked-out worldview. I suspect, though, that the people with that worldview would not be the ones you would first consider to be  out-of-step.

And that’s the point of this post. I write this because I see a fundamental flaw in reasoning among many American Christians today.

An old saying that makes some of us sigh goes like this: “Only Christians bury their wounded.” In too many cases, that’s true. Someone screws up and they’re as good as dead in the midst of too many church bodies, ESPECIALLY if the screwup is a pastor.

I have a theory about this. As much as most Christians adamantly say they believe that all people are sinners, they just as adamantly don’t practice that belief. Too many of us practice the faith as if everyone were born good, as if original sin never existed.

What else explains the utter shock, the profound horror, when Elder Joe Smith winds up in a sordid affair? Oh, how the tongues wag and the old ladies fan themselves hoping to stave off an attack of the vapors! 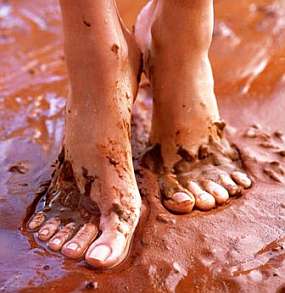 Everyone just dies and goes into convulsions. Our church splits, people leave, and in many cases, Elder Joe Smith crawls off to die somewhere—or at least that’s what a good chunk of us wishes he would do.

And why do we believe that? Because no matter what creedal confession rolls off our lips, we simply don’t believe that people are sinners.

The odd thing about this is that worldly people aren’t shocked when sinners act like sinners. We Christians, though, stuck as we are on the foundational lie of the innate goodness of other Christian people, go belly up like a lake full of dynamited fish when yet another Christian stalwart proves spectacularly that all have sinned and fall short of the glory of God.

One of the most well known pastors/authors out there today, a man respected throughout the Godblogosphere, revered almost—I know people who know him well. I’ve heard the stories. They’d cause a few of his fanclub to spontaneously combust, I suspect.  But you know what? His issues are no worse than yours or mine.

I’ve got to believe that nothing would profoundly change the focus, direction, praxis, and reflection of each Christian in this country than to stop asking the question, “How is it that good Christians can do bad things?” and start asking, “How is it that any of us can do even one good thing?” If that latter question ever caught on, we’d stop propping up Christian heroes who inevitably fail (and then suffer our public savaging) and start acting like humble servants who know our place. We would comprehend and embrace that each of us, should we stray from grace for even a moment, would be capable of the most vile evils. We’re lying to ourselves if we practice Christianity otherwise.

If 45 years of living has taught me anything, it’s that there’s not a person out there who doesn’t have feet of clay. I know I do. (Heck, I aspire to clay feet at this point in life!) Why should I expect otherwise in other people?

Isn’t it about time we Christians stopped spending all our free time attempting to hide our clay feet, started living under grace, and actually extended genuine forgiveness to others?

9 thoughts on “A Clay-Footed People”