Had an interesting conversation with a Christian friend yesterday regarding churches in our greater metro area. He noted as many as 60 have banded together to adopt a uniform missional platform that involves the same curricula—in this case, Mike Breen’s 3DM—essentially turning these churches into “cloned” sister churches of each other. My friend named all the “hottest” churches in our area as being in on this movement to one degree or another.

In the past, I have been aware that individual local churches of various denominational and nondenomination affiliations have joined one “paradenominational” umbrella group or another (such as the Willow Creek Association), plus many have attempted to mimic the ministry styles of successful local churches, but I have not heard of organized efforts to unify local churches around the same ministry philosophy or curriculum. In truth, I was shocked by this revelation.

Are you seeing anything like this in your local metroplex? If so, what are the details? And what is the unifying philosophy/curriculum?

Your feedback is greatly appreciated. Thank you!

Shortly before He was crucified for your sins and mine, Jesus prayed this prayer:

Unity gets a bad rap in some Christian circles. Being an “ecumenist” is tantamount to denying the Lord publicly, at least in the eyes of some.

But can anyone look at the Christian Church today and say, “Jesus’ prayer was answered! Just look at all the unity Christians enjoy”?

Silly question, especially given the thousands of denominations that exist.

On the list of grievous sins most Christians carry around in their heads—murder, sexual perversion, stealing, lying, envy, pride—I don’t think disunity makes it into the top 100.

Look at the importance Jesus gives unity, though! He considers it the sign by which the world knows that He was truly sent by God, proving that He wasn’t just another in the long line of self-appointed holy men spouting nice aphorisms suitable for a bumper sticker.  And that unity of those who claim to love God verifies how much God loves the people of the world too (our favorite verse, John 3:16, and all that, right?).

Doesn’t that sound like it’s of the utmost importance? Yet unity is given the shortest of all shrifts. Being seen as always being correct trumps all efforts at unity, as if it were impossible to find unity if people are in different places in their walk with God and see life from different perspectives as a result.

What if disunity among Christians was the worst sin of all, since it undermines the very proof that Jesus is who He said He is and discredits the claim of God to love? Given the importance of those two bedrock beliefs in the Christian faith, how could disunity NOT be one of the most grievous of all possible sins? The perception of the character of God Himself is at stake when we are not unified, isn’t it? Doesn’t disunity within the Church even tear at the reality of the Trinity of God?

Yet who out there is striving to make unity important? Which well-known church leaders are working toward unity more than anything else, rather than separating themselves and their fans into tinier and tinier fragments of the Church Universal? Which disgruntled churchgoers are making unity the most important consideration for STAYING in a less-than-ideal church, rather than bolting like so many others do?

Fact is, too many of us Christians could not care less about unity.

My question then: Is the lack of importance we ascribe to maintaining unity within the Body of Christ making Jesus’ prayer for unity fail?

When I was a kid, they built this suburban church near I-275 that rivaled the Colosseum in Rome. You could fit four of my church inside it. Every time we drove past, my folks would comment on how big it was. In my mind, it was as close as you could get in the 1970s to a genuine megachurch. Imagine a sea of cars on Sunday nights. Heck, we’d even watch them park cars on the church lawn. (Hey, there were no Sunday night services at the Lutheran church, so yeah, we were out and about.)

Funny thing is, I’m 45 years old now and have lived in the Greater Cincinnati area for most of my life, yet I’ve never met a single person who attends that church. The Christian world is impossibly small, and I swear that while the world has its six degrees of separation, for Christians it’s more like three.

Still, I’ve never met anyone from that church. Doesn’t that raise questions about that church’s ability to evangelize? If they aren’t getting out and meeting people, including a fellow brother like me, how will they ever lead anyone to Christ? What is it about them that they have no presence? 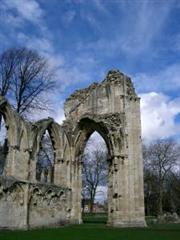 What’s wrong with me that I’ve never encountered one of them? What’s that say about my presence in the community, my willingness to share Christ with someone new, even if that someone new turns out to be another brother in Christ?

You see, it’s all a matter of perspective, isn’t it?

I drove past that church the other night, and it seemed small. And the more I stared at it, the longer I hunted for signs of life, the more it looked abandoned.