In the lexicon of the English language, failure may no longer be an option.

Instead, we English-speakers bring you fail. Not as to fail, but simply fail. (If you aren’t tracking with this, Slate has a fine article explaining this latest twist in the mother tongue.)

Of course, being the the lovers of the extreme that we Americans are, fail is itself a fail unless we can find a way to magnify it. This becomes epic fail. And because all extreme language needs its counter, we have coined the term epic win.

The landing of US Airways Flight 1549 is an epic win.

Yes, Roe v. Wade was an epic fail for Christians in this country.

Asleep at the wheel. Knocked out. Comatose. Guard dropped. You name it, the Church of the early 1970s didn’t react to what was happening under its nose. Didn’t stick to the game plan. Didn’t get it. So we got Roe v. Wade and millions upon millions of barbarically destroyed human lives. An entire generation of people culled. Epic, epic fail.

You witness a lot of handwringing over Roe today. What wasn’t big news leading up to that day in January 1973 is now. With a new president who believes Roe was an epic win, Christians are even more alarmed about the course of our country and its attitudes toward abortion. Many frantic calls will emanate from pulpits and burn up the Christian radio and TV airwaves. We will hear a million outlines for courses of action which we have all been hearing for decades.You can almost recite them by heart.

In the language of fail, let’s look at those familiar calls to action:

The Republican Party has done next to nothing to end abortion even though the rhetoric of the party reeks of pro-life talk. But talk is cheap. As long as Christians keep devoting their time and energy to this do-nothing party of talk, we will not end abortion.

See above. Candidates are often very vocal about their pro-life sentiments. Funny how we hear about this incessantly come election time, then all goes quiet immediately afterwards.

I demonstrated with Operation Rescue. I was on the frontlines of protesting at abortion clinics. 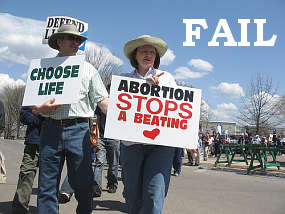 Yes, there were small victories when a child was saved once in a while. But the scale gained is not the scale that will save this country from judgment.

We can show pregnant women pictures of aborted fetuses. We can fire up the 3D sonograms. We can talk and talk and talk about the horrors of abortion. Yet 36 years of pro-life education has given us one thing: the surety of more than a million babies aborted in 2009.

Prayer a fail? How is that possible? How can God not honor our prayer to see abortion end?

Prayer fails under one critical condition. If I am outside on a bitterly cold day and I encounter a destitute man rubbing his chilled hands together while mine remain snug and warm inside my gloves, do I need to pray about what my course of action should be? Haven’t the Scriptures informed my direction? Isn’t the Spirit in me telling me what to do? What is the point of me praying, “God, I really need to know what to do about this man and his cold hands. If it be thy will, let him come over to me and strike up a conversation. Then I will know that I need to do something”? Do I need to pray this? No, I don’t. I need to do what the Spirit and the Word, both of which I claim to know, have already told me to do.

When we use prayer as a means to look spiritual while failing to do what God wills of us, prayer is a fail. Disobedience does not move the heart of God toward us. What should we expect from God when we know what to do but do not do it?

And there is one enormous thing we are refusing to do even though we know we must do it.

In the early 1960s, the Church in America abandoned its primary mission to make disciples in the name of Jesus. We got sidetracked into culture wars, fighting the commies, worrying about hippies, looking at every threat in the world while ignoring the fact that lost people were remaining lost because we forgot what we were supposed to be about. I believe that’s the main reason why abortion became the law of the land.

If we have tried every other means to stop abortion in America and nothing has worked, the simple reason comes down to this: When a nation is filled with people who have not been born again, that nation will not honor righteousness.

That is the American Church’s epic fail. We simply stopped making disciples.

Want an epic win and an end to Roe? Make disciples. If every Christian in this country committed to actively sharing Christ with a half dozen lost people this year, just one every two months, I think we would begin to see change. If we stopped toying around with discipleship and got serious about raising up the next God-fearing  generation within our very own churches, we would see change. We would know that epic win that we have craved for 36 years if we dropped all the other skubalon that has distracted us and focused on our primary mission of making disciples.

Because a nation of people filled with the Spirit would have no need for abortion and would abolish it in a heartbeat.