I’ve long been a fan of Leonard Ravenhill, the British revivalist. Ravenhill can pack more punches in five minutes than the average megachurch pastor delivers in five years. We need more men like him.

If you listen to enough Ravenhill, the first unusual aspect of his preaching is that he continually sprinkles his messages with lines from hymns. What’s most amazing to me is that he’s probably doing this off the cuff. In other words, those hymns are deep inside him.

When we begin thinking about ways in which the Church in America can improve its education of the Body, 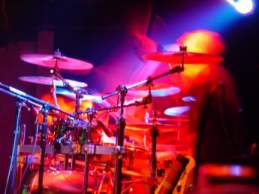 most people look past music. I don’t.

If you’re over 40, I’ll bet the majority of you can fill in the blank to that lyric.  Yep, it’s “the warrior.” I have a bazillion pop/rock songs from my youth filling my head. Fact is, I wish I could get rid of most of them, but there they stick.

Likewise—and in a far more edifying way—I believe our Christian hymnody is critical to transmitting truth that sticks with people.

When I was sitting down to write this post, the first hymn that popped into my head was this one:

The Church’s one foundation is Jesus Christ her Lord;
She is His new creation,
By water and the word:
From heaven He came and sought her
To be His holy bride;
With His own blood He bought her,
And for her life He died.

Elect from every nation,
Yet one o’er all the earth,
Her charter of salvation,
One Lord, one faith, one birth;
One holy Name she blesses,
Partakes one holy food,
And to one hope she presses,
With every grace endued.

Frankly, that’s a theology lesson in two verses. If you know that hymn, you’ve got a solid base of truth in your noggin.

Compare that to what CCLI says is the number one church worship song today:

It’s a good song. We sing it in our church. We played it just a few weeks ago, in fact. But you can’t escape the reality that just doesn’t say as much. In addition, it swaps the meaning of the word you between the refrain and the verse. I mean, just who is you ?

I believe there is a solid place for contemporary worship songs that are God-directed and contain more “emotional” lyrics. I remember the first Vineyard worship song CD collection I picked up. I was blown away. And honestly, it made me look at the Vineyard more seriously. It’s one reason why I spent 16 years in Vineyard churches.

But as is so common with American Christians, we pushed the pendulum so far the other direction on hymnody that we lost the rich base of hymns that were theology lessons in four verses and a chorus. Too much of what we sing today is devoid of theology beyond “God loves me.” Yes, that’s an essential truth, but c’mon…

One will argue that today’s songs are more directed toward the Lord, and while some of that is true, it’s missing a greater truth. A hymn like “The Church’s One Foundation” is like the stones the Lord asked the Hebrews to pile beside the Jordan to remember their crossing into the promised land. Hymns that aren’t directed right at God have a place because they remind us of who we are and what the Lord has done. They are the stones of memory that bolster our foundation in the truths we believe.

It saddens me to no end that my son’s generation will grow up oblivious to hymns like “Spirit of God, Descend Upon My Heart,” “For All the Saints,” “Christ the Lord Has Risen Today,” “O Sacred Head Now Wounded,” “And Can It Be,” and on and on. I might sing them at home, but if my son hears them nowhere else, they will become artifacts, just like my dad singing opera arias is an artifact to me. My son may recall a nebulous, nostalgic mood, but the hymns will have otherwise lost their intended meaning.

I will go so far as to say that music’s staying power places it above nearly every other mode of communication. I may not be able to remember the content of a sermon I heard preached two months ago, but chances are high I’ll be able to recall and sing most of the new worship song that debuted that same Sunday morning.

And that’s why this issue of theology set to music matters. If the average Joe in the pew remembers a dozen hymns packed with spiritual goodness and depth, perhaps he’ll recall their truths in the time of testing in a way that he may not have responded based on other, less sticky, sources.

If we want to build a stronger Christian, then let’s write better songs that highlight the core doctrines of the Faith.

My favorite parable Jesus told gets no respect. As one of the shortest, it’s easy to overlook. Nor does it swim in allusions. Stark, it makes its point quickly like a jab to the solar plexus.

When I get asked about this fave parable by well-meaning Christians, I often get a blank stare. I’ve had more than one tell me, “That’s not in the Bible.”

I assure you it is:

“What do you think? A man had two sons. And he went to the first and said, ‘Son, go and work in the vineyard today.’ And he answered, ‘I will not,’ but afterward he changed his mind and went. And he went to the other son and said the same. And he answered, ‘I go, sir,’ but did not go. Which of the two did the will of his father?” They said, “The first.” Jesus said to them, “Truly, I say to you, the tax collectors and the prostitutes go into the kingdom of God before you….”
—Matthew 21:28-31

I don’t think any parable Jesus told messes with the head more than this one.

The brother with the right answer missed it, didn’t he? He was probably the good son. The one who had it all together. Called dad “Sir.” He is the one his mother doted on.

The other? Possibly the surly one. Today’s version would be up in his bedroom,

its windows painted black, listening to Godsmack while he surfed those sites on the Internet.

The good son talked a good game. Said all the right things.

The bad son told dad to kiss off: “I’m not into your corporate farm lifestyle.”

But the unlikely one did the will of the father and the other didn’t.

All the talk in the world, the smooth, glib words spoken politely and in accordance with all righteousness, led to zero output on the part of the supposedly good son. He tickled the father’s ears, but the results spoke for themselves.

Recently, a post from a couple months ago (“Priorities Amid Darkness“) got some new traffic because of a link from Milton Stanley’s Transforming Sermons. The general response was a tad negative.

In all deference to my friends out there who think it’s all about believing, the more I read the Bible, the more convinced I am that all the right words and thoughts aren’t going to cut it. The proof is in the doing.

Jesus framed the parable of the two brothers in context to show the stark contrast between the people who talked and the people who actually responded. The talkers with the holy thoughts, the good sons of the world,  had convinced themselves of their standing, but they were, in fact, outside looking in.  Goats, as Jesus called them in Matthew 25.

Who was in? The people who didn’t say the right things. The surly ones, perhaps. Harlots and hustlers. Time and again, their actions in the New Testament proved louder than any audible sermon.

I’ve said, “I go, sir,” more times than I care to admit. I say it constantly in church, but then I wander off afterwards  and forget about the vineyard. I suspect I’m not alone.

Whoever has my commandments and keeps them, he it is who loves me. And he who loves me will be loved by my Father, and I will love him and manifest myself to him.” Judas (not Iscariot) said to him, “Lord, how is it that you will manifest yourself to us, and not to the world?” Jesus answered him, “If anyone loves me, he will keep my word, and my Father will love him, and we will come to him and make our home with him. Whoever does not love me does not keep my words. And the word that you hear is not mine but the Father’s who sent me.
—John 14:21-24

I know that James’ “right strawy epistle,” as Martin Luther called it, doesn’t sit well with some people. But we can’t ignore the fact that the doing matters. Doing may not justify you, but the lack of doing—at least as the Bible portrays it—proves a surefire way to know who is out.

It’s just as the John passage says. The doers receive the ongoing revelation of Christ. This is why that matters:

And this is eternal life, that they know you the only true God, and Jesus Christ whom you have sent.
—John 17:3

Eternal life comes through knowing God. Knowing comes through the revelation of Christ. And Jesus himself said in John 14 that the revelation comes through doing what He commands. We can setup night watches and pray for days on end. We can memorize the entire Bible. But if we don’t do what the Lord says, it all comes to nothing.

That is why this verse carries meaning:

But be doers of the word, and not hearers only, deceiving yourselves.
—James 1:22

The good son, the one who promised his father he would go, deceived himself into thinking he was doing right just by his saying yes to his father. Our churches are packed with good sons and daughters with obedient words that roll off the lips, yet the vineyard goes untended.

And I wonder about all those who don’t say or think as I do, yet are doing the work of the Kingdom even as I talk a good one that ultimately produces no fruit for the God I claim to love.