Sunday, we got our first heavy snow this winter. Usually, we have one under our belt by the start of December, but this year it took until two-thirds through January. I blame Al Gore.

As one of the worship musicians at our church, I'm compelled to make the Sunday worship. I called the worship leader and was told we were on. No time for sandbagging the pickup bed. Slip on the parka and go. Since I go in early for practice and the rest of the family comes later, I knew I'd be the only Edelen there. My wife's next car will be AWD to match my 4×4. Every car should be AWD, if you ask me.

I now live in one of those areas that mystified me as a kid tuned to school closings on the radio. "Man, those Western Brown School District kids are ALWAYS getting off, even when it's like a half-inch of snow!" was the familiar lament. I had no idea where Western Brown, Felicity Franklin or Betel Tate schools were located, but I envied the heck out of them for getting off school if a mere handful of flakes conglomerated. Now I live in one of those areas and I better understand. Twisty country roads infrequented by salt trucks and snowplows tell you all you need to know.

Five minutes from church, the snow turned to sleet. I wanted nothing more than to turn around and go back home. I can handle about two feet of snow in my 4×4 pickup, but ice remains the great equalizer. It makes everyone look stupid. 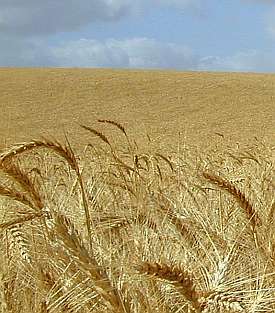 So the worship team all showed. We wondered as we looked out the church windows if it would only be us. The pastor walked in, his shoulders slumped, and he wore a sanguine, confused look. To call off the meeting or not. The ice came down. The clock hands spun.

All told, maybe sixty out of our three hundred regular attenders showed. Twenty percent. The normal buzz that stirs right as the service started wasn't there. You could hear the echoes in the sanctuary. We were here, but it all seemed perfunctory.

From my vantage point behind the drums center stage, I couldn't help but ask if I was seeing a vision of the American Church circa 2025, when the glory days of Evangelicalism surrendered to tough times for Christians. I noted the faces in the pews and did a mental check of the 20/80 rule. Yep, the 20 percent of the church that did 80 percent of the work took up their regular positions in the pews. The faithful.

Who's left when the tough times come, when it's life-threatening to label oneself a Christian? What will your typical American megachurch look like when the penalties come down and meeting isn't as easy as it once was? Will that enormous building feel like an empty warehouse? Had it been an empty warehouse for a decade already?

Maybe we'd all flee to house churches by then, leaving behind the vast complexes that held the Starbucks and Lifeway shops, mute testament against presumption. Perhaps we checked out of Christianity altogether. It simply got too hard. We'd have to give up so much. Everything we worked for years for. Renounce and keep.

Or stay true to Christ and kiss the earthly goodbye. Make the choice. Now.

But this morning, snow explained the thinning. Stole some of the vibrancy, too, I think. If persecution, and not weather, faced us, I wondered if we'd be excited. The underground Chinese Church gets cited for its powerful testimony amid persecution. Could that be us, too, in the same circumstance, our faces beaming? If the sword replaced snow?

You've got to wonder who would fall away, who would betray the remnant, and who would instead die by the sword, the name of Jesus on their lips. The martyrs. Wheat.

It's so easy to be chaff.