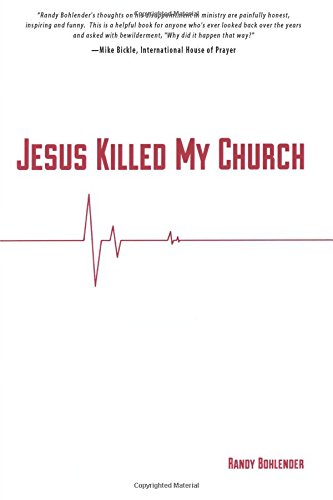 Steve Bremner at The Fire on Your Head podcast pointed out that Randy Bohlender‘s book Jesus Killed My Church was free for Kindle on Amazon, so I bit. Hey, provocative title–and I’d met Randy years before when our paths crossed at Vineyard Community Church in the Springdale area of Cincinnati.

The gist of Randy’s book: God leads. Put yourself in a place to hear His Spirit and then go with the flow.

Autobiographical and an apologetic for why you need to be baptized in the Holy Spirit, Jesus Killed My Church documents Randy’s and his wife’s first encounter with the Holy Spirit, learning to listen and trust the hearing, and following God along unexpected pathways. They end up at a home for wayward teens in the hinterlands of North Dakota, an old-fashioned Tennessee church, the Brownsville Revival, Burning Man, The Call, and the defunct College Football Hall of Fame in Mason, Ohio, all the while keeping their spiritual eyes and ears attuned to what God had next. In between stops, the Bohlenders get input from folks I’ve broken bread with, Steve Sjogren and Rusty Geverdt namely, and they reject some voices that attempt to steer them away from their God-directed courses. I mean, who hasn’t received a phone call out of the blue from some “prophetic” caller pronouncing words that clash with someone else’s prophetic leading? Been there, done that.

All the words, dreams, infillings, and circumstances that seem too good to be circumstance land the Bohlenders at Kansas City’s International House of Prayer and their eventual founding of a Christian adoption organization.

Oh, and the church they planted back in Cincinnati withered and died, hence the title.

Now, I’m going to tie this story with The Big Lebowski. Because it’s obvious, right?

While trying unsuccessfully to get recompense for his ruined rug, The Dude encounters a panoply of weirdos consisting of anarchists, pretentious artists, criminals, and denizens of a bowling alley, that sport serving as a metaphor for life. The slacker Dude stumbles from one bizarre scene to another, hoping against hope that something positive might go his way regarding his rug. In between, he sires a child, buries a friend, and tries to make sense of this nonsense as he’s swept from one odd happening to the next. Helping him to cope is a cowboy who drops in now and then to comment on the proceedings, because, hey, every mythic story needs its oracle.

I know it may seem strange, but I see Bohlender’s story and The Dude’s as linked.

Recently, I had lunch with a friend, and as we discussed the vicissitudes of life as 50-something white guys in America, he stated that the world we live in now may be God’s best possible outcome. I wondered then if it was best for the whole of the world at the expense of being the best for any one of us in it, and I still wonder that.

God may very well sovereignly make the best that can be made of this sin-sick world, but what does that mean in the lives of you and me? To fill the gaps and to make that “best world” happen, does it come at the expense (as God may require) of individuals who may or may not live their “best life now”–as Joel Osteen calls it?

We have this tendency to think that God is always working His best in our lives, but are we the focus? Or is the world the focus?

When we attempt to look at another’s life and draw conclusions from it, what can we really know? And does being a Spirit-filled Christian mean that we can make any greater sense of the direction of our lives compared with someone who isn’t Spirit-filled?

As a Christian, I believe God leads. But what happens when He leads and the outcome is not only unexpected but downright bad–or at least bad on the surface? And what if it’s not just bad on the surface but terrible no matter which layer you examine?

Bohlender paints a picture of guidance by the Spirit that seems wonderful and freeing in close-up, but when you stand back and look at the big picture, it seems no better than the random vicissitudes of life.

Is that how God works? Is this His “mysterious ways” we always hear about?

And how is this any different than the story of The Dude, who somehow ends up okay in the end, if not exactly in the outcome he expects? What separates the drifting pothead seeking nothing more than to get through another day from the ardent Christian seeking guidance to change the world?

Now true, one is fictional and the other not, but when we survey the lives of people, Christian or heathen, fact and fiction converge.

I believe my friend is right about this world being the best possible world God can make given mankind’s fallenness. What that means for what you and I experience of it individually–well, that’s much harder to grok. Some seem destined for greatness, while others get ground up in the gears, and it’s not always clear which camp they belong to.

All I know is a Christian knows that somehow it’s all in preparation for when this life is done, and sometimes the when, how, and why won’t make any sense this side of heaven.

Recently, I spoke with a peer who is a dedicated educator. He is going blind rapidly. This will end his career and render him disabled.

This doesn’t make sense to me.

Perhaps I am admitting my own folly, but I just don’t understand.

Not understanding is not the same as not having an explanation. I can tell you from a theological perspective what the explanations might be. I know how living in a sin-filled world works. I get the sovereignty of God. I can call up chapter and verse. I can answer you with logic and “wisdom.”

But that doesn’t mean I understand.

The title of this post is “The Nonsense of Life.” And indeed, despite being a Christian of many years, I still find life to be nonsensical. Again, this does not mean there is no sense in it at all, only that I am unable to comprehend it.

God says that His thoughts are far higher than mine. For this reason, they appear as nonsense to me. Like the directions for building a complex microprocessor, one paragraph in Finnish, the next in Hungarian, finishing in base 3. It reads like gibberish because I don’t have what it takes to understand.

Tragedies reverberate through time, the ripples spreading out and colliding with other ripples, both good and ill. Some cancel out, while others amplify.

I know another teacher, many years ago, who had saved most of her career to go on a year-long cruise around the world when she retired. Her students were excited for her because she would take that cruise a month after retiring. Yet within a week of getting her gold watch, she died unexpectedly, never having set sail, all that preparation and hope wasted.

Why? I can’t tell you. I’m sure another teacher in another place at another time DID take a similar cruise. Sure I can offer theories, and perhaps they have some element of wisdom, but in the end, they won’t be any more enlightening as to why one took that cruise and the other never made it.

I am a Christian because no other way offers the same truth. No other way explains life more thoroughly. All the other options are meaningless in the long run.

I wish I could say that being a Christian has answered all my questions, but that would be a lie. If anything, I have more questions the older I get, and the answers I defended so vigorously as a younger man are less crystal clear today.

One day, I will understand. Until then, there is the nonsense of life.