Spent most of the week “riding the chair” as I like to say. Misunderstood a timetable point on a project I was working on, so I had to kick it into overdrive. Cerulean Sanctum went on the backburner. Apologies if I felt a bit distant and uninvolved this week.

Here’s what I’ve been thinking:

Anyway, have a wonderful, relaxing weekend, no matter what holiday it is.

When your child comes up to you and sighs, “Dad, are you ever gonna get off the computer?” you know you’ve been crankin’. Work has consumed my every waking second the last ten days, thus the cobwebs and crickets on the blog. It’s great that business has recovered from the lull I experienced the first half of the year, but I’ve actually got a case of tendonitis from spending too much time interfacing with my anti-ergonomic office setup. Heck, my desk and chair are the same ones from when I was 13-years old, so what does that tell you? (Hey, don’t laugh. Ethan Allen is good furniture, unlike the sawdust-board junk coming out of China today.)

Anyway, I’m still hoping to post on genuine revival someday. Got another post that will probably get me delisted from a number of blogs, too, called “The Rescue of Moonbase Asimov!” Genuine storyline in that one. Now if I could just find the time to write them both.

When I don’t have time to write something well-researched and filled with gravitas, I toss out various disconnected thoughts, the kind of sampling that goes on in my head every 1.5 seconds, so it’s true to life, even if it is a bit scary to the uninitiated.

Many of you know that I’ve been advocating a low-glycemic diet. I’ve lost 30 pounds on that diet and kept them off. I’ve even added back in a few “no-no” foods and still kept the weight off. Very cool. What’s uncool is that I finally realized that the three bouts with kidney stones I’ve had in the last seven months are…well, due to the diet. Seems that switching to healthier foods and substituting foods with a lower glycemic index means eating more foods higher in oxylates, calcium oxylate being the primary ingredient in the most common kind of kidney stone. In fact, I checked what I eat and almost every single item is high in oxylates. Some people don’t tolerate that well, and I just happen to be one of those people. Any urologists out there with some advice? Ugh.

If you’ve got an old, unused PC sitting around that might have a 1GB 168-pin PC100/133 ECC DIMM, and you’re willing to sell the DIMM for a cheap price, let me know. I need one badly.

I’ve been too busy to keep up with all the comments on my Lakeland posts, but thanks and welcome to all the first-timers who came and commented. Things are a bit abnormal around here right now blogging-wise, but I hope to get back to my normal schedule soon.

Thank you also to all the people praying for my family in the wake of some of the illnesses we’ve endured recently. Those prayers are still coveted. What’s happened in the last few months is a major reason the blogging continues to suffer.

A number of regional banks are in deep doo-doo, including one I banked at for years, a bank considered in the industry to be one of the best run. In fact, three of the largest banks in my area are in trouble. The problem? Collapsing hedge funds coupled with turmoil in the mortgage industry. In fact, if I were you, I’d be very careful about where you have your money right now. Some big name banks may go belly up. As someone who is familiar with this (I had money in the savings & loan that precipitated the savings & loan crisis long ago), I know the signs. Be careful out  there. Don’t rely on FDIC. We’re in for some nasty bumps ahead.

This continues to be the rainiest spring I can recall. Great sleeping weather, though. Now if only I could find some time to sleep!

Do social networking sites actually DO anything for you? I’ve been on LinkedIn for a long time, but I’m mystified at what it brings me. Any LinkedIn gurus out there who really know how to play that network?

As a child, the neighbor’s collie used to bite me constantly. When you’re being routinely attacked by Lassie… well, it can scar you for life. Nonetheless, we became dog owners recently. 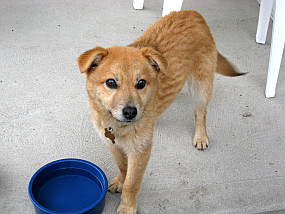 We come to ownership reluctantly as our new mutt (pictured right) was unceremoniously abandoned on our property by yet another heartless fiend. See, we live a mile off a rural highway out in an idyllic spot, and people love to dump their puppies and kittens on our property thinking we’ll take care of them. Here’s a clue: most die. Feral dogs and coyotes mangle the kittens for fun (or else the furballs starve to death) and puppies wind up roadkill or diseased. It breaks my heart that some people are so thoughtless, but then again, even Jodi Minivan is capable of atrocities done in the name of expediency and personal comfort.

More than just about anything else, I want to believe that the American Church is healthy. The facts prove otherwise.  I am weary of people pulling out the “touch not the Lord’s anointed” and “so-called ‘discernment’ is nothing more than divisiveness” trump cards. But hey, what people want to fill themselves with is between them and God. I just want to add this: “My people are destroyed for lack of knowledge.” That’s worth memorizing.

Any other men out there at that strange age where you realize that the attractive businesswomen in their early twenties that you run into in the course of your day, the kind you would’ve chatted up in your single days, are now young enough to be your daughters?

I’m old enough to remember that presidential nominations occurred at the party convention. Anyone else remember? You didn’t have a presidential candidate tabbed until then. Quaint, I know. This is why I am deeply disturbed by the events unfolding in the Democratic Party (as if the party isn’t disturbing enough already). You’ve got two candidates that split the vote right down the middle, yet it’s as if one never existed. In another time, Obama and Clinton would’ve both gone into their convention flying high and no one would have thought it unusual to have two viable candidates to choose from in a real, gen-u-wine nominating convention. Instead, you’ve got this travesty of superdelegates that has usurped the people’s vote. And what craven political monsters those superdelegates are. You can bet that most are just trying to save their political futures and alliances rather than thinking about what is best for this country. But hey, I’m in a flyover state, so what do I know.

Man, is there anything more time consuming than trying to switch automatic checking account debits from one bank to another? I’ve spent almost ten hours following up on a dozen of these things and I’m still not done. It’s a great convenience when you don’t have to pay the bills, but the act of switching may undo all the time you saved!

In that same vein, the older I get, the more I see that all our time-saving devices don’t really save us time. They only make life more frantic trying to pay for and maintain them.

With age also comes this serious question: How do most people live? (Darned if I know.)

The box of store brand chocolate-chip cookies that was $1.29 last year is now $2.19. I don’t know who these economists are who keep talking about the slow, meager rise in consumer prices, but going from $1.29 to $2.19 in a year is not “a slow, meager rise.”

We’re seeing wild turkeys on our property regularly. I never saw turkeys around here until just the last few years. Now I see them everywhere.

On the other hand, the rural highway near us looks like a deer abattoir. Talk in the insurance industry has insurance companies ditching payment for accidents involving deer. Nice.

The Wall Street Journal, the newspaper of record in the Edelen household, could not be any more schizophrenic than it is right now on the topic of the economy. Every day they print a flurry of editorials talking about the fact that the country is NOT slipping into recession (or worse), yet their business pages are filled with one company after another reporting massive downturns in revenue or declaring bankruptcy outright. My take? Too many rich pundits are out of touch with how “the other half” live.

Considering all the spurious commentary on my part so far, I want to end with a serious question: When was the last time a stranger came up to you and asked whether you were born again? Used to happen to me all the time more than a decade ago, but almost never now. Now we can say that’s because people found that form of evangelism to be unproductive, but are we just lying to ourselves? Maybe we’re not really all that interested anymore in evangelism and where people spend eternity. Does any legitimate reason exist that you and I can’t help lead at least one person to Christ each year? Honestly?

Have a great weekend.