When I was growing up, it seemed like men were different.

I can’t put my finger on it exactly—and maybe it’s a rose-colored glasses thing tinted by youth and inexperience—but men seemed more serious back in the 1960s than the men of today. Back then, if a man who lived nearby said he’d meet you at 6 p.m. Friday in a neighborhood park to toss a baseball, he would

—actually show up on time

—show you something you didn’t know, like how to throw a curveball or a sinker

—possibly bring you a ball to keep

—tell you, in passing,  why alcohol and cigarettes were bad for your health

—not even consider any “funny business”

And your parents wouldn’t think twice that you were out alone in a park with a man who was not a relative.

I don’t know if men changed or our ability to trust changed, but it’s not that way anymore.

When I was growing up, there was a sense among all the men that they had a responsibility to boys, even those who were not their own sons. Call it that “tribal” feeling—that men, all men, were charged with ensuring the next generation grew up straight and true, into better men than the generation that spawned them.

Back when I was at Wheaton, I wrote a paper on a thesis of my own devising concerning the implications of the loss of rites of passage within the Church. I grew up Lutheran, and to be a full voting member of the church, we had to go through catechism and then be grilled on the Faith by the pastor. 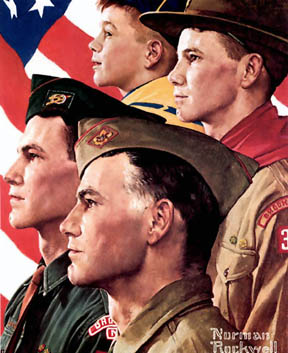 These were not lobbed question, either, but stuff like What is the nature of Man? and How does Man relate to His Creator? (Today, you’d be hard pressed to find a kid in your youth group who could thoughtfully answer those questions.)

That rite meant something. When you successfully navigated it, the world changed. Adults expected more of you. You could sit on church boards and make decisi0ns along with the rest of the adults. And the men in the church treated you like one of their own.

Today, we have too many churches who have abandoned rites of passage. And it shows, especially when you consider that some polls have 80-85 percent of Christian teens renouncing their faith by the time they graduate from college. Too many of those “enlightened” graduates go on to be brain-dead party boys who screw everything that moves and live in perpetual childhood. Back when America was largely agrarian, children meant something: the survival of the family. But today, children have no genuine purpose except to be children. So why should we be surprised when today’s child-men never outgrow that perception, never developing into the kind of men some of us older guys still remember. Now, asking callow youth to grow up seems like trying to blow out the sun, given that for 21+ years no one bothered to model for them what a real man, a real Christian man, looks like.

I’d like to think that I was one of those old school guys, like the kind I used to know. But I’m not really. I realize that the ideal started fraying with my generation, that we were the first boys that had an uncertain manhood awaiting us. Feminism was on the march, the drug culture was firing up, and so was the culture of privilege and entitlement. Somewhere along the way, manhood did a nosedive and has not recovered.

Not convinced? Need an example?

I don’t think a better example exists than with the current financial meltdown. If you were to go back to the founding of the investment houses, like Goldman Sachs, Lehman Brothers, and Merrill Lynch, those companies were run by real men. If some smart-aleck tried to run subprime-mortgage-backed derivatives  past Mr. Goldman, Mr. Sachs, the Lehman brothers, or Misters Merrill and Lynch, he’d have one of those founders burying a foot about 18 inches deep in his backside. Why? Because those founders were men, and their names meant something. Getting involved in such tawdry schemes violated their ethics and their sense of who they were as men. Today? Most of what passes for men today would trade their reputations for a quick killing in the market, no matter who got slaughtered in the aftermath. And that’s exactly what we saw exposed last year.

This isn’t an appeal to go kill a bear with a pointy stick, as has been epitomized by much of the Christian men’s movement, but to start getting serious and singleminded again about how we turn boys into men, real men, not the poseurs masquerading as  men today. We need to see genuine rites of passage return to our churches, a passage not into Spartan-like manhood but into proper handling of  the Scriptures, women, children, the work world, and on and on.

My fear? That my generation is so compromised that we won’t be able to reconstruct what it is that we have lost so we can pass on something of worth to the boys following us.

And trust me, that’s something that should make men everywhere genuinely afraid.

20 thoughts on “Still Looking for a Few Good Men”