Diane over at Crossroads: Where Faith and Inquiry Meet discusses one of my pet issues when she takes on the Hegelian dialectic. For those unfamiliar with this philosophical term, Diane explains: 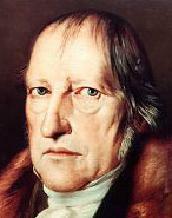 Here is an example from Hegel’s writings:

THESIS: In Ancient Greece the stoics believed in a moral absolute that applied to everyone.

ANTITHESIS: During the Enlightenment period, Rousseau believed that the individual decided what was right and wrong for him.

SYNTHESIS: Society decides what is right and wrong for its citizens.

The obvious problem with the dialectic is that it can be used to come to a synthesis that is blatantly false. As a perfect example of this, consider

Thesis: All men are sinners and doomed to hell unless their sin is dealt withAntithesis: Jesus took away the sins of the world

Synthesis: Because Jesus broke the power of sin, now no one will go to hell.

If this kind of reasoning seems familiar to you, it’s because nearly all small group Bible studies are beholden to the Hegelian dialectic. After nearly thirty years of Christian small group experience, I can say without reservation that every small group I have been in (spanning ages, sexes, denominations, and maturity levels) has employed this kind of faulty reasoning at some time or other to make pronouncements on spiritual truth.

The crux of the problem is the group leaders. By and large most small group leaders are either too passive to rein in flawed group synthesis or they lack the command of the Bible they absolutely must have to counter a heretical synthesis with the actual truth of God. Fast-growing churches are bedeviled by this, assigning (or allowing) group leaders who have no business leading a group because they lack Christian maturity and the inner witness needed to stop mangled synthesis in its tracks.

Though I have studied under some of the best-known small group proponents in Christendom, I believe with all my heart that small groups are a disastrous place for people to learn the Scriptures. Let them be about fellowship, prayer, worship, service to others, or anything else, but not about studying the Bible in depth. The tendency for synthesis of ideas that contradict the Scriptures is rife within these groups. Time and again I’ve heard leaders assent to heretical ideas synthesized by a group trying to reach some consensus. The need for group leaders to maintain peace at all cost necessitates this, even if truth is sacrificed.

I have come to this sad pronouncement because too many churches are using small groups as their main means to teach the Scriptures. Seeker-sensitive churches where the preaching on Sundays is more chatting than teaching, where the sermons are not sermons on the Word but reflections from life on some topical idea that demographic studies say the people want to hear, suffer from this to an extraordinary extent. The outcome is that a person desiring sound biblical exposition and a knowledge of the Scriptures instead sits through a small group study where the conclusions reached by the group may contradict the word of God. That person never develops a comprehensive view of the unity of Scripture because the topical teaching doesn’t provide it, nor does his small group.

The naivety of church leaders is to blame for this. A couple hours of weekend trainings for a month doth not a small group leader make; it is silly for churches to believe that small groups can possibly provide the depth of Bible exposition that a trained and approved handler of the Scriptures—supposedly the pastoral leadership of the church—can provide. Yet too often the pastor in the church preaches topically on Sundays and believes that a small group meeting during the week led by someone with a passing comprehension of Scripture can make up for what he’s leaving out.

That’s just plain crazy, if you ask me.

The small group movement and its emphasis on moving Bible study to these groups to make it more accessible has instead compounded the very lack of understanding of the Scriptures that it sought alleviate. Preachers who abandoned expositional preaching and teaching made this worse because they gave no opportunity for their best seekers to hear the Bible in its complete context. Is it any wonder then that the people who fill our churches on Sunday have no holistic Christian worldview?

Unless we have small group leaders who know the Bible inside and out and can take firm control of a group striving for heretical synthesis and steer them back to real truth, I think we should stop studying the Bible in our small groups. Put Bible study and teaching back into the hands of workmen approved to handle the Scriptures. If that can’t happen in small groups or adult Sunday School classes, then put it back into the pulpit. As the word of God says,

My people are destroyed for lack of knowledge….
—Hosea 4:6a ESV

Thanks to the Hegelian dialect and the loss of sound expositional preaching from the pulpits across America, the destruction continues unabated.